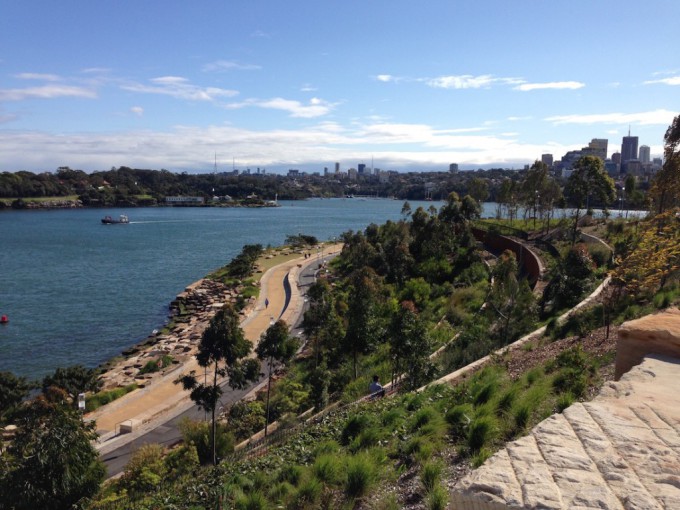 “It’s not often I get the chance to be at the opening of a new park and especially so far from my own home in such a significant setting as the Barangaroo Reserve. For the past few years Australia has welcomed me with open arms and I’ve got to know the rich diversity of its native plants so this is a real treat. As an outsider this park seems to speak to me of millennia of land, sea and air in its setting, its materials and planting. There is an authenticity to it that makes it work as both a contemporary park and a place to experience a tradition of landscape and plants.

The place is named for Barangaroo, member of the Cammeragal clan and wife of Bennelong of the Eora people, who played a significant role in her community and that of the early British colony. Winding around the peninsula it does what the earlier Botanic garden was intended to do by bringing people to the water’s edge and in its layout allows important new views of both old and new Sydney.

Designed by renowned American practice PWP Landscape Architects and overseen by a board headed by former Prime Minister Paul Keating the former industrial area has now become a ‘naturalistic headland’. The foreshore is dramatically constructed from 6500 sandstone blocks that were quarried on site. Dramatic because they almost tumble down from the highest stargazer lawn at the top through a series of steps and paths. At the bottom  they are also used as sea defense walls and as they age their patina will only add to the spirit of the site. A curved space at Munns Slipway creates an aquatic amphitheatre that I hope will be used with the wharf opposite for performance. Sitting with the sun on our backs in this space you get a glimpse of how this park will develop.

The planting whilst obvious in its use of Sydney’s native plants is also a good choice for this exposed headland where only the toughest natives will survive. The 75,000 plants are doing well although there are signs of stress on the very highest plants exposed to the worst of the weather. That said the test of a new landscape is how it stands up to the climate and the night before my visit Sydney had been subjected to two hours of torrential storms and flash flooding. When I visited a clean up operation was in progress with mulch being swept up but the plants and grass looked thankful for the moisture but the compacted granite paths had suffered a little.

This is a great new landscape for Sydney. It’s understated on one hand, yet dramatic in its elements and the views afforded from its shores. Definitely a positive new space that is sure to be embraced by local residents and visitors alike.”

To see the park from the water and hear Graham Ross’ commentary on the history of Sydney Harbour, and Barangaroo, join us on one of our Jacaranda Cruises starting October 28. Bookings are a must – they’re popular – contact Ross Tours Jacaranda cruise.