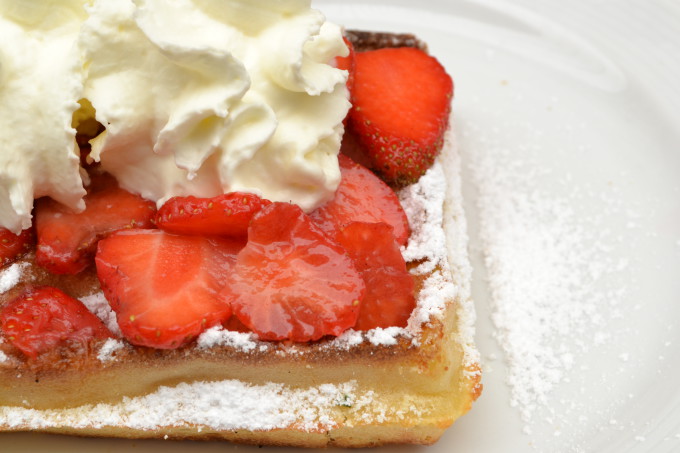 Belgium seems to specialise in souvenirs you’re bound to carry home as excess baggage – on your hips! Hot chips with everything, a plethora of beers, and above all – waffles and chocolate.

Waffle stands like this one are everywhere in central Brussels, especially around the city’s mascot, the mannekin pis. That’s him as a fake chocolate version snacking on a waffle. The real thing is not much bigger than a chocolate and is set high on a corner wall in a little alcove. As art he’s inconsequential, but he’s still the most photographed feature in Brussels. He even has 500 outfits, so that tourists can come back day after day and collect a wardrobe of images!  Have a look, if only to have a giggle at the shameless marketing in the shops that surround him. Anyone for a candy-coated chocolate copy? 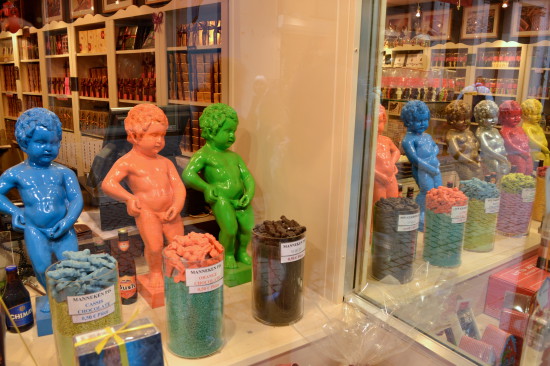 Save your waffle indulgence for Mokafe in the Galeries Royales Saint-Hubert. This beautiful arcade with its domed glass ceiling and richly decorated interior was one of the world’s first shopping malls. Think of it as a temple to industry, capitalism and modern life, circa 1850. 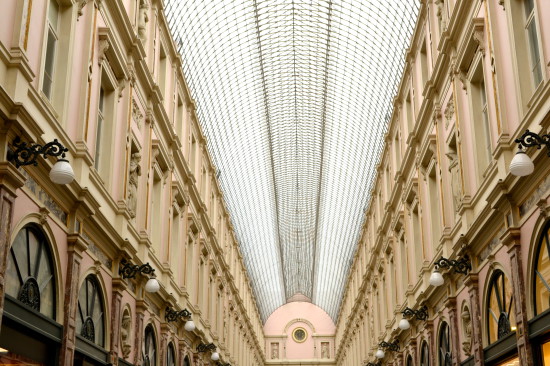 Take a seat at a marble-topped table, consider what temples to capitalism look like these days, and order your waffles. The waffles are freshly made and served warm – crisp on the outside and nice and soft inside. Choose fresh strawberries and cream, or chocolate sauce if you must.

If you’re after chocolate, though, you’re better off with either Neuhas or Godiva, two of the big chocolate names in Brussels, which both have boutiques in the Galeries Royale.

Or you could explore some of the smaller artisan chocolate makers off the Grand Place not far away. In most of these chocolatiers you can buy as few as two pralines, so there’s opportunity to find a maker who suits your palate: spiced gingerbread, salted caramel, marzipan and orange, chilli and pink peppercorn….

Looking in the windows is calorie-free and almost as good as tasting. The chocolate art on display is incredible – from intricate snake-skin handbags filled with pralines, to wildly inappropriate chocolate elephants! Can’t get enough chocolate? Head to the chocolate museum. 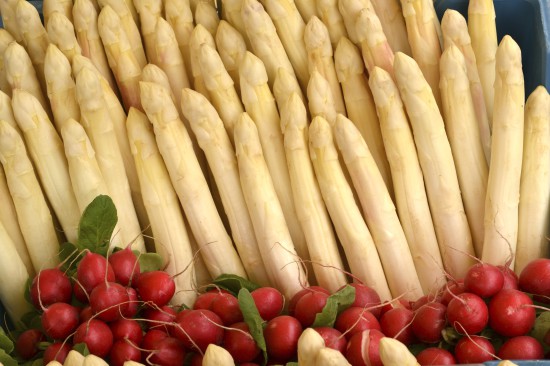 Yes, I realise those are asparagus and radish not chocolate pralines, but I didn’t want you to think Brussels was all sweet stuff.

Plus, what I want to tell you about is not photographable – The Museum of Letters and Manuscripts. It’s a little museum in another lovely arcade, not far from Galeries Royale. In our over-rushed digital world, letters are a rarity, and you feel the loss when you see these fascinating notes from history. A letter, with its glimpses into personality courtesy of handwriting, paper choice and doodle quality, tells so much more than an email.  My personal highlights from the collection: Casanova’s signed agreement to inform on ‘moral infringers’, addressed to his inquisitors in 1780;  and a note from Louis XVI advising where his salary should be deposited while he is imprisoned in the Tuileries. As intriguing as the content is the form. Robespierre writes in a girlishly ornate script. The handwriting of the architect of The Terror seems only to be missing hearts over the iiis and a smiley face after the signature! Hemingway shows a more typically masculine style. He writes from Cuba on a typewriter whose full stop key he hits so hard the thin page seems to have been riddled with bullet holes.

After a few fascinating hours with these heroes and villians you might even be ready for another treat.

We’ll be in Belgium again in 2014, tasting the treats, and visiting the great gardens. We are timing our trip to catch the incredible flower carpet that gets laid out in the Grand Place. The full itinerary will be up soon, but if you’d like to put you name down to receive a brochure, send us an email.