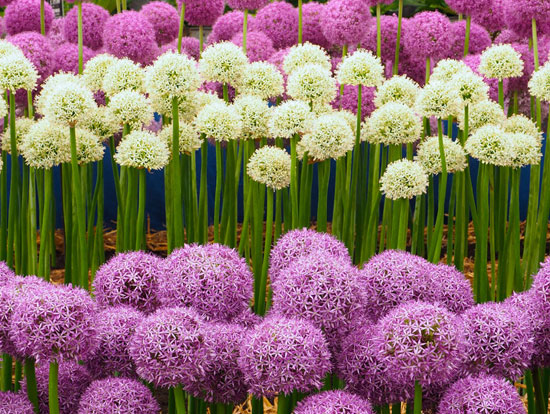 Chelsea is a magical garden world as full of dreams and emotion as it of of sheer hard work and skill.

We took three groups on Opening Day this year and asked the tour leaders to tell us what moved them most.

Kazuyuki Ishihara is a Chelsea stalwart in the Artisan garden section, producing exquisite visions of Japanese garden style. This year’s garden was inspired by Japanese ideas of hospitality, with a welcoming tea room screened by maples and balanced above an iris-edged stream.

A slice of Yorkshire

Of all the show gardens at the 2018 Chelsea Flower Show the one that caught my eye was the one that took me back to my childhood – the Welcome to Yorkshire Garden designed by Mark Gregory. Over the years at Chelsea there have been many different Yorkshire gardens but none have resonated with me in the way this one did.

Who would have thought that I could be enthralled and inspired by a ‘Show Garden’ with natural grass and buttercup pasture, a backdrop of native elder, larch and hazel woodland, complete with tumbling beck (that’s a creek to you and me , Ed.) and dry stone walls. Was it my childhood memories of jumping across babbling brooks, exploring the rugged limestone pavements, woodlands and lush pastures of the Yorkshire Dales on so many school geography trips? Maybe so.

As I visually explored the elements of the garden, I found it captured the naturally rugged but scenic nature of the Yorkshire Dales and villages. The dry limestone walls and the stone bothy (cottage) were built on-site using traditional Wensleydale stone techniques with exquisite artisan detail. How I would have loved just to pick some of those stones up to take home and place in my own garden! The bothy displayed traditional Yorkshire crafts and food, including the delicious and famous Wensleydale cheese.

What really made the setting complete was the relaxed, cottage-style garden surrounding the bothy. Visitors could easily relate to this style of planting and many would have taken ideas back to their own garden at home. Flowers, mainly in shades of pink, purple and white, skirted the beck and bothy, including foxgloves, lupins, delphiniums, iris, sweet peas, lady’s mantle and euphorbia. Closer to the bothy vegetables, including cabbages, lettuce, leeks, kale and chives, were mixed together in a potager style. A stunning standard wisteria draped the outbuilding providing long racemes of purple against the woodland scene beyond.

The garden was Mark Gregory’s 30th consecutive year at Chelsea and he certainly used all his experience to create a picturesque slice of the Yorkshire Dales. The garden deservedly won a Gold Medal, the Best Construction Award and the coveted People’s Choice Best Show Garden. So I wasn’t the only one who found the garden totally inspiring!

Libby Cameron fell for the story behind the horse

I was walking through The Main Pavilion, where the specialist growers show off their blooms, and my attention was grabbed by a gorgeous horse, made from chicken wire stuffed with straw. He had a floral wreath bridle and was pulling a cart piled high with buckets of flowers through a wildflower meadow. As I was admiring and getting a closer look, a woman in a beige apron ran up to a group of women wearing the same apron, and they all screamed and a few burst into tears – they’d won a Gold Medal!

I was so taken up by the emotion of the whole thing that I had to talk to them about it. The display was called Going to Market, and it had been put together by Flowers from the Farm, which is a national network of cut flower growers in the UK that was set up in 2011. The organisation offers support to its members and tries to encourage florists and flower buyers to choose locally grown flowers instead of imported flowers with all the air miles that entails. They told me that 90 percent of the flowers sold in the UK are imported.

The 14,000 stems used in the display came from 94 growers as far away as the Scilly Isles off Cornwall in the south, to the Hebrides off the Scottish coast in the north. The growers picked their flowers on the Saturday morning before the show, drove them to one of 30 hubs dotted around the country, where they were packed into refrigerated vans and driven to London. On Sunday volunteers put the display together – with the flowers in containers, from buckets to test tubes – no environmentally unsound florist oasis! – ready for Press Day on Monday, and judging on Tuesday, which is the day we were there.

Gold! I was so pleased for them. So much of Chelsea requires huge budgets and corporate sponsorship, but here was a display these growers from all over had put together themselves. And the flowers were beautiful – lilac and allium, aquilegia, foxgloves, gorgeous ranunculus and lupins. And of course it all smelled fantastic. I’ve been thinking about it ever since.

Postscript – Flowers from the Farm auctioned off the display props after the show finished up. I was at Gordon Castle in the Scottish Highlands a few weeks later, researching a story on the walled garden, and there was the Chelsea horse! Angus Gordon Lennox had bought it as a birthday present for his wife, Zara, who plans to use it to show off the flowers and produce grown in the huge walled garden at Gordon Castle.

I can’t stop thinking about Sarah Price’s loose, light and lovely garden for M&G. Sarah is renowned for her painterly approach to planting. She has an artist’s eye for colour and texture – her academic qualifications are in fine arts rather than botany or landscape architecture – and she was co-designer of the much-lauded 250-hectare London Olympic Park.

For her Chelsea garden this year she was inspired by an exhibition of Claude Monet’s paintings. It wasn’t the subject matter that drew her in, but Monet’s creation of colour. Seen up close she was struck by the way Monet created colour and the perception of depth through little swishes of pain, often with splashes of quite vibrant contrasting tones. Thoughts of Monet’s brushwork mixed in her dreams with memories of Mediterranean holidays full of sun-baked walls and the sound of water. She tried to capture this dream state in the garden, using oddly angled walls of rammed earth to both suggest the fragmentary nature of a dream, but also to catch the elusive London sunshine, and the shadows of plants. (The rammed earth walls were formed on site – just one of the amazing feats of landscaping skill on display at Chelsea.)

The walls defined different views of the garden. There was no single focal point, but a number of them depending where you stood – a rough-textured urn in front of a wall, a grove of mature and twisted pomegranate trees reflected in a still pool, a stately olive casting shadow patterns on a wall.

Following a Monet-method she chose sun-loving plants with small flowers in shades of yellow, pink, white and lilac and planted them loosely so as to capture the light, adding occasional bold tones of orange or scarlet. The grass heads and diaphanous flowers swayed in the breeze and caught the light; the pinkish tones of the walls glowed with an inner-warmth; water sparkled and tinkled. I was mesmerised by the effects, and find even now that Sarah’s dreams have become my own.

Libby Cameron will lead our tour to the RHS Chelsea Flower Show next year on Members Day for a less crowded experience. Check out the itinerary here

Catch Robin Powell talking Chelsea highlights with Linda Ross on the Garden Clinic podcast, available from iTunes, Spotify or wherever you get your podcasts, and at gardenclinic.com/podcast