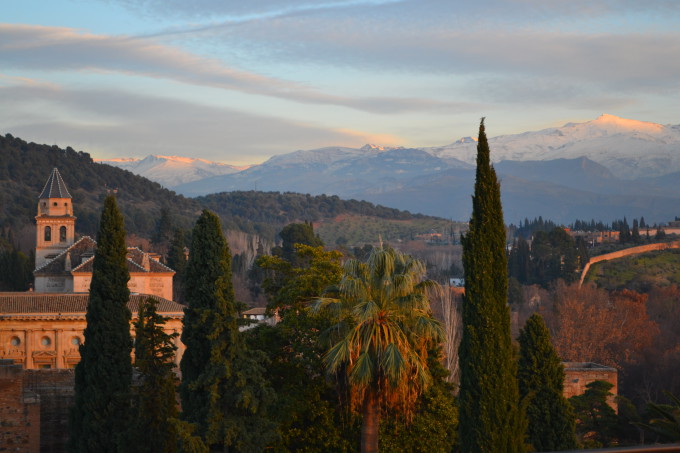 Gardens of the Alhambra

You could make an argument for the gardens of the Alhambra being the most influential gardens in the world. I’ll leave the argument to others and just say that going there feels both familiar and inspiringly new. 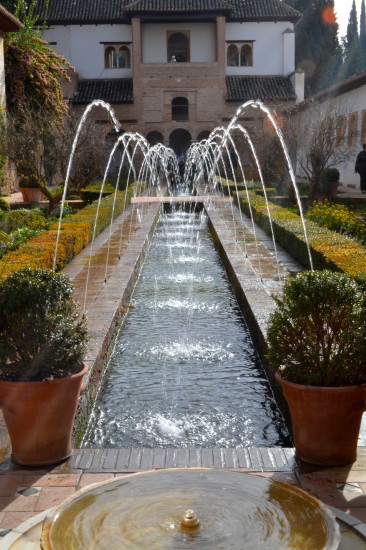 Why don’t we start here with the the inner garden of the Generalife. It’s called the Patio de la Acquia and it was laid out in the early years of the 14th century, when the Alhambra was the fort, palace and administrative centre for the last Moslem rulers in Spain, the Nasrid dynasty. By the end of the century the Nasrids were gone, defeated by all-conquering Catholic monarchs, Ferdinand and Isabelle, in 1492. The Alhambra subsequently became one of their palaces. (Isabelle and Ferdinand’s daughter, Katherine of Aragon, soon to be Henry VIII’s first wife, grew up here).  Renaissance ideas, Spanish baroque and 18th century neglect all influenced the gardens, but their structure remains true to ancient Islamic garden design. 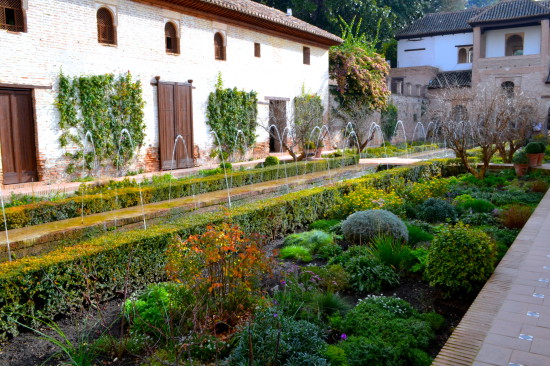 That design is centred on water, the source of all life.  A rill splits this courtyard garden in a tradition that goes back to the the 6th century BC  and the gardens of Cyrus the Great at Pasargadae, in what is now Iran. The water spouts, though, are new, and so is the perennial border style planting about which garden writer and designer Penelope Hobhouse is particularly dismissive. She yearns for the original sunken beds of aromatic flowers. The Moorish rulers of Spain, particularly the Umayyads, who ruled southern Spain from Cordoba, were great plant collectors, and introduced figs, pomegranate, roses and other landscape-transforming plants to Al-Andalus. 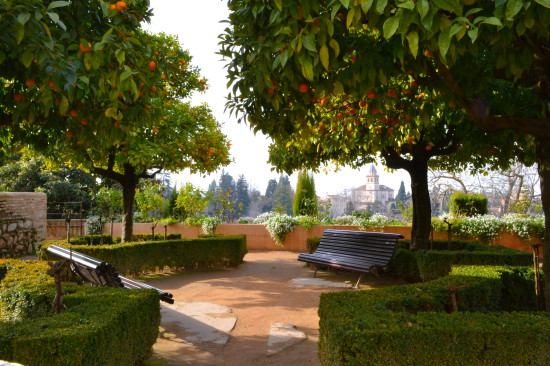 Elsewhere the gardens feature hedges, with their tops cut like crenelated castles, arches of roses and of oleander, and orchards of pomegranate, almond, and as I’ve written elsewhere, oranges. Water is the constant theme. The Nasrids built on the hydraulic engineering legacy of the Romans with fabulous success. Still pools reflect the ornate architecture, moving water burbles from lotus-shaped bowls, and at one point water tumbles down the slope through channels carved in the twin balustrades of a staircase.  This ‘water staircase’ gives you the sense of descending alongside a rushing stream and was called by the garden designer Russell Page “the best thing in gardening that I know anywhere in the world”. 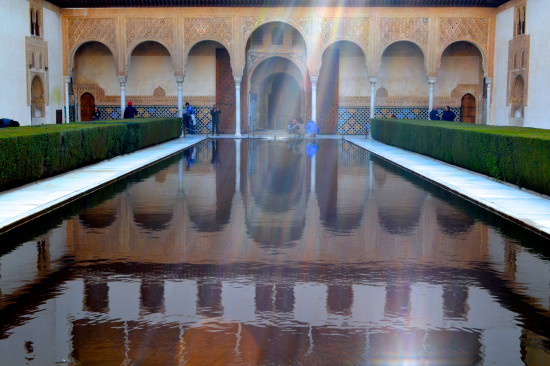 Perhaps even more famous than the Generalife gardens are the courtyards of the Nasrid palaces themselves. This shot shows the Court of the Myrtles. These palaces were built later in the 14th century and brilliantly merge ideas of exterior and interior. The design seems to focus on capturing light, both inside and outside.  Here the elaborate stucco arches of the palace are mirrored in a pool which collects and reflects light. Beyond the arches is the Hall of the Ambassadors, where the tiered ceiling is covered in leather, painted and studded with mother-of-pearl stars, and designed to give the awed ambassadors (and the modern tourist) a wonderful sense of the heavens at night. 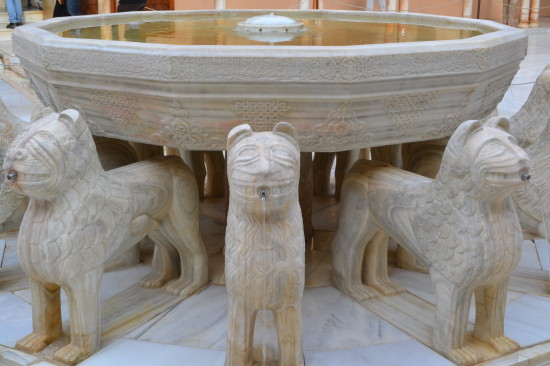 The Courtyard of the Lions has recently been completely restored, with copies of the original, somewhat docile and dog-like lions mounted around the central fountain. A fascinating exhibition in one of the court’s pavilions tells the story of the restoration and the challenges faced by modern engineers in unravelling the secrets of the courtyard’s water works. Of all the courtyards this one best presents the Islamic view of the garden as paradise. 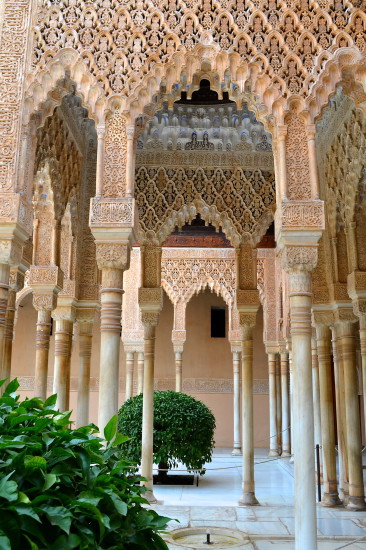 Its quartered space represents the four corners of the earth, the rills the four rivers. The elegant forest of fine columns and intricate arches suggest the palm trees of an oasis. Light bounces around the marble surfaces, filters through the delicate stucco and casts lacy imprints on the ceilings and walls. The new marble floor accentuates the effect, though it was originally a sunken garden creating a foot-level flower carpet of colour and fragrance. 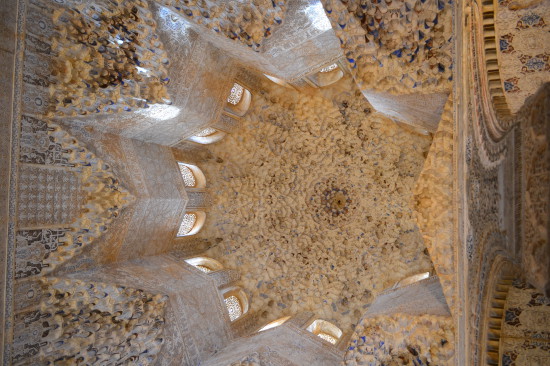 The pavilions that border the courtyard are intricately decorated, with swirling organic motifs and calligraphic renderings of sayings from the Koran. The carved ceiling of this pavilion is called a muqarnas. It’s designed to inspire thoughts of god and the infinite, and though my thoughts remained mostly earth-bound, I did contemplate how water and light combine to create paradise in any garden, no matter how grand or how humble.

The Alhambra is on the itinerary for our tour of Spain next year. Have a look at the full itinerary here.