As Graham Ross finishes up another year presenting the Royal Horticultural Society’s 2014 Chelsea Flower Show he takes time to share his favourite moments from the week that was. And yep we love that his jacket matches the cobalt blue in this garden!

He had a great chat with Alan Titchmarsh who had just designed and built a garden for Chelsea. As the world’s most famous and best horticultural event, RHS Chelsea was the perfect place to celebrate both Alan’s and RHS Britain in Bloom’s 50th anniversaries. 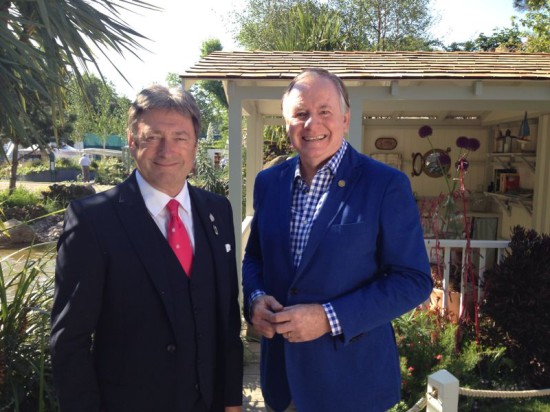 Alan Titchmarsh, said: “I can think of no better way of celebrating 50 years as a professional gardener, and 50 years of RHS Britain in Bloom, than by creating a garden for the RHS at Chelsea. I began my career in horticulture on the edge of Ilkley Moor and now garden on the Isle of Wight – a fact which is reflected in my Chelsea garden and Britain in Bloom itself which celebrates the importance of life-enhancing floral displays from one end of the British Isles to the other. ‘From the Moors to the Sea’ is a joyous celebration of our floral heritage and the people who do their bit to conserve our islands’ plants and flowers and realise the importance of beautifying our surroundings whether in a village, town or city.” Graham on the line from London, said “This year the weather was so warm they had to wrap the iris flowers to stop them from opening early! No matter what the weather throws at Chelsea, bitterly cold like last year, or this year’s heat wave, it’s always a knock out. I get a kick out of the breathtaking inspiration when the world’s best flower growers, nursery folk, designers and garden lovers come together for the annual pilgrimage to London. For me it’s good ol’ hard work filming each day and interviewing lots of designers and celebrities but it’s a week-long celebration of everything I hold dear. This year’s themes included the centenary of WWI, Paradise Gardens, a European ‘dolce vita/viva Italia’ vibe, an influx of new designers and a real changing of the guard (so to speak) with so many upcoming talented youngsters! Here are my happy snaps.” I was stoked when my favourite garden won the coveted People’s Choice Award. ‘Hope on the Horizon’ was designed by an extraordinary young man Matthew Keightley, 29. The garden symbolised the path to recovery by wounded military personnel, you see Matt’s brother is presently serving his 5th tour of Afghanistan. Well done Matt! The design is based on a military cross, the solid square granite blocks symbolise the soldiers physical well-being and the floaty wispy planting representing their psychological well-being during the stages of rehabilitation. A nice contrast I thought. Spires of foxgloves and check those red lupins out – they reached for the heavens whilst dots of columbines and iris provided colour and movement. I loved the hidden concepts of this garden and the entangled connections. Matt gently reminding us of the long path to recovery for many of our service men and women. This romantic pleasure garden full of light, shadow and textures was a refreshing mix of lime-green euphorbia, champagne lupins, and foxgloves with flashes of blue iris and phlox. I loved the simplicity of the elegant central square stepped pond and water rill. To me the garden resembled a happy frothy bottle of champagne. Luciano Giubbilei really is the master of stillness and movement. There had to be an Aussie contingent somewhere and of course I hunted it out. Much-loved elder of Australian gardens and a dear friend of mine is designer and author Marylyn Abbott. She designed one of the smaller Artisan gardens called The Topiarist (awarded Silver Gilt) She filled it with swirls and spheres of buxus and a cacophony of glowing white clematis, cleome, columbines, roses, lupins, foxgloves planted out the front of a romantic simple rose brick and tile garden house. This appealed to all who love clipped and sculpted gardens and was a good contrast to all the flowery wildflower meadows featured elsewhere. I loved how the weeping willow created such a pretty ceiling over this garden. It was hard to believe this garden was built in 10 days. And don’t you wish we could grow lupins in Australia!

Marylyn was responsible for the garden at Kennerton Green in Mittagong and since moving to the UK has created another masterpiece at West Green in Hampshire where she weaves her exquisite art of garden making with her other passion Opera. Visit West Green here. I am in my element here. The Gold Medal of the smaller what I call achievable gardens went to this exquisite serene Japanese garden called Togenkyo ‘Paradise or Earth. This one was for all the maple and moss lovers out there, me included! The garden is designed to resemble the mesmerizing place from the fable – Togenkyo. Have you heard of it? The fable goes…. Togenkyo is a place where everyone can forget their troubles, a dreamy place, the most beautiful place you’ll ever see. Once there it cannot be revisited. Enchanting right? To me it was paradise – the lush  greenery, the mossy walls and the peaceful waterfall are etched on my memory forever.

Graham Ross has been the horticultural presenter on Better Homes and Garden TV for twenty years. He is the Director of Ross Garden Tours International and started the company in 1980. He leads tours to Japan and Hawaii each year.

Photographs with sincere thanks to Graham Ross (and Dean his cameraman) and the Royal Horticultural Society.