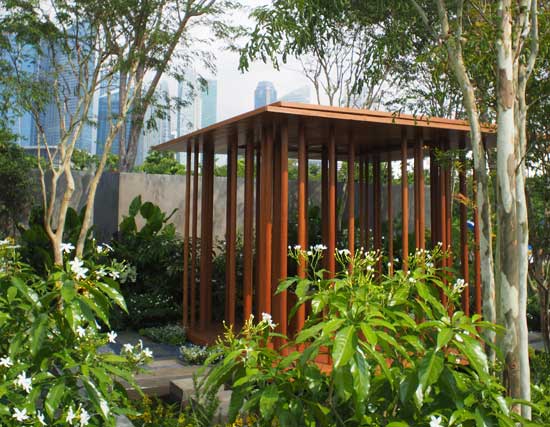 We grabbed some tropical inspiration in Singapore last year when we took two groups of Ross Garden Tours travellers to the biennial Singapore Garden Festival. Leading one of the groups, Robin Powell was well placed to report on all the happenings in the centre of Asia

Words and pictures by Robin Powell

There’s a lot to love at the Raffles Hotel, from the uniformed and mustachio’d doorman who’s been welcoming guests for decades, to the iconic traveller’s palms and the equally renowned High Tea. Of course we never visit without admiring the various courtyard gardens. Here, a simple planting sums up tropical style. The bright sparks of orange heliconias fly over broad lime leaves in the foreground, with the dark hands of raphis palm and taller palms in the background. The lime green banana-like leaves of a taller growing heliconia reach out
of the clump to catch the light. 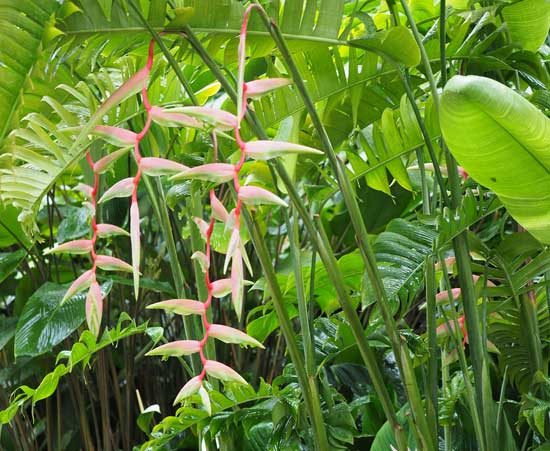 Its trees distinguish Singapore from other Asian cities. The roads are shady avenues of mature trees, often sporting ferns and orchids in their forks and cracks, and the parks feature much-loved grand old specimens. In fact the tree that features on the Singapore $5 note and is in the Botanic Gardens has been so well-loved it’s had to be fenced off to allow its roots to regenerate.

Trees on the heritage list are protected by a 10m exclusion zone and the city encourages citizens to nominate trees they think need special protection. The importance of trees was emphasised by this show garden at the Singapore Garden Festival. ‘An Urban Jungle’, designed by Adam Frost, featured a shady pavilion settled over cooling water, around which a quartet of leopardwoods, Caesalpinia ferrea (now Libidibia ferea), cast lacy shade. These Brazilian natives are familiar throughout Singapore and are also a favourite Brisbane street tree as they can be pruned to fit under overhead wires – or into a backyard. 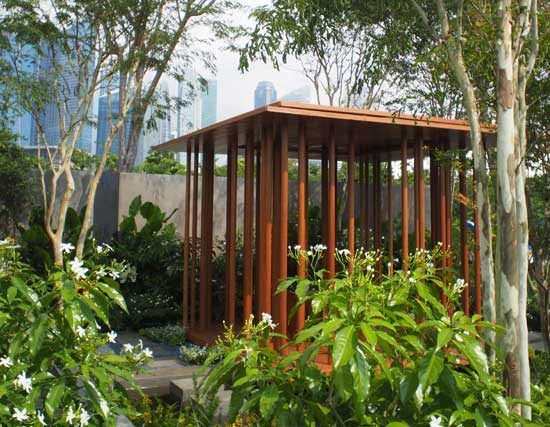 Few Singapore residents have an in-ground garden. Instead, they garden on balconies, rooftops, walls – and indoors. Gardeners are always looking for new ways to display plants inside. 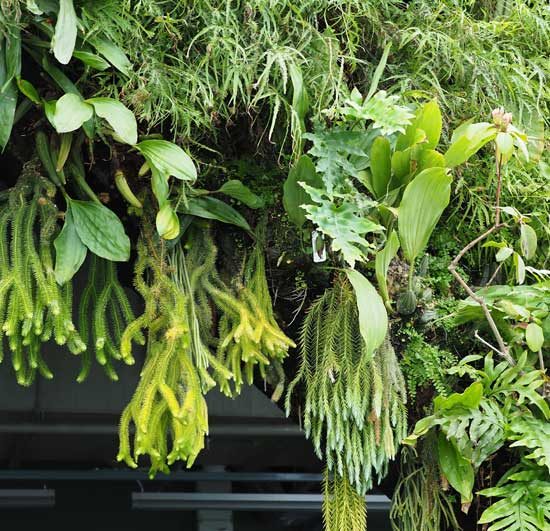 Vertical gardens were made for Singapore.

At last year’s Garden Festival we saw incredible bonsai specimens, rex begonias in black wooden frames, big living pictures coloured by begonias and the indoor/outdoor screen, seen here. On a background of leaves lacquered onto board, frames had been attached which supported an intriguing textural display of tillandsias and bromeliads. Oh, plus a handy hat rack! 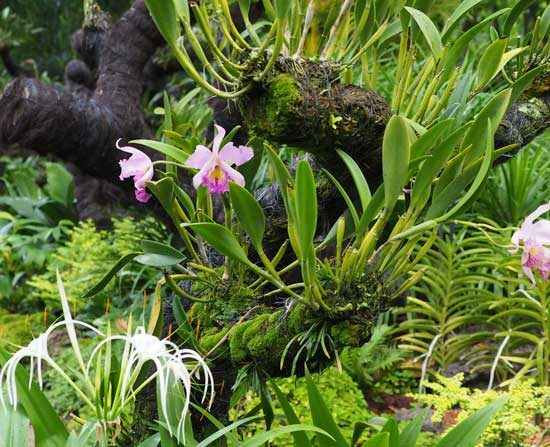 Nowhere on earth grows orchids as well as Singapore

Think Singapore think orchids and no matter how many times you visit you always come away with a new way to display orchids. This year we were struck by the displays of vanda orchids at the Orchid Show in the Flower Dome at Gardens by the Bay which featured trays of  vandas, at just above head height so you could look up to see all the details on the faces of the flowers. Spanish moss curled and tucked around the base of the plants to disguise the roots and tray with a soft lacy fringe. 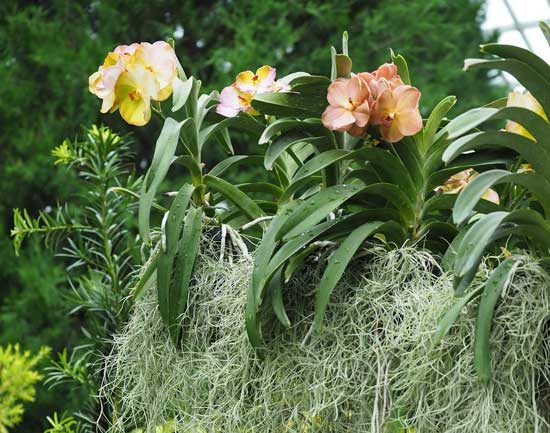 Spanish moss disguise the roots and tray with a soft lacy fringe.

As you’d expect there is also plenty of inspiration at the National Orchid Gardens at the Singapore Botanic Gardens where we saw orchids growing in trees, and on what looked like dead stumps but turned out to be concrete forms wrapped in black coconut fibre. The orchids had only recently been tied to their new homes but roots were already clinging to the fibre. We show off our prized flowering orchids in pots, but they also look great in the garden. Here pots of white vanda orchids are sunk into a bed with the broad leaves of elephant’s ears, Colocasia,
behind them, the pots disguised by a ruff of black coconut fibre.

Linda Ross will return to the beautiful city within a garden that is Singapore when she leads the Singapore Garden Festival tour, 22 – 28 July 2018. For an itinerary or further information call Ros & Royce on 1300 233 200. 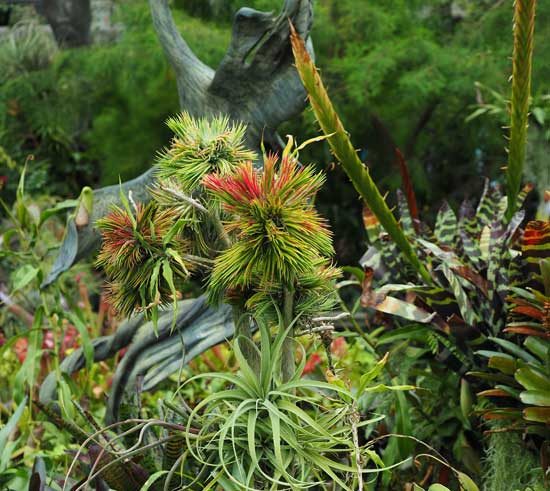