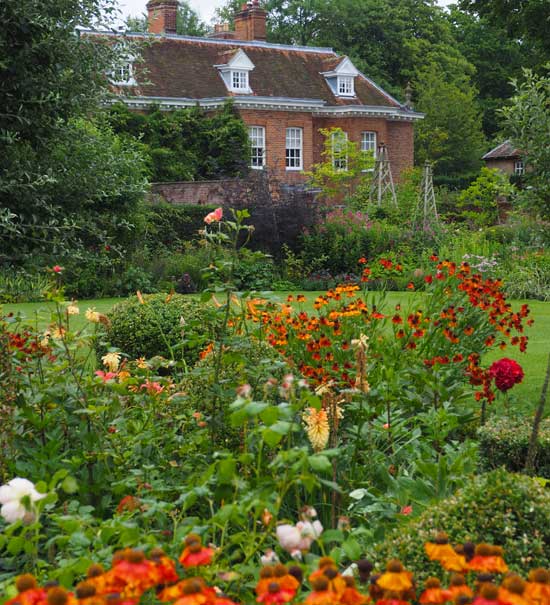 In my garden: West Green House

Eight years ago Marylyn Abbott sold up her wonderful Southern Highlands garden, Kennerton Green, and moved to England to work full-time on a much bigger project – West Green House.

Marylyn Abbott thinks big. She has big plans and the energy to see them through. So she was the perfect person to take on West Green House after the IRA detonated a bomb in the forecourt in 1990.

The plan was to assassinate Lord McAlpine, then Secretary for Northern Ireland. He had been a tenant of West Green House, which is owned by the National Trust, but was no longer living there. The bomb exploded and the house jumped on its foundations, then re-settled, a little wonkily, back down. The National Trust started looking for a new tenant, someone with vision, determination, and an enthusiasm for gardens. They found their ideal in Marylyn, and she took one look at the facade of soft, rosy old bricks and fell in love.

Over the past 24 years she has overseen the clearing of brambles and woodland to bring the garden back. Here she tells us what happens in summer, when the garden hosts an opera season. While other gardens owners might invite musicians into the garden for an afternoon, Marylyn organises a season involving two opera companies performing two full operas, accompanied by the garden’s own orchestra of some 50 players. I told you she doesn’t do anything by half! 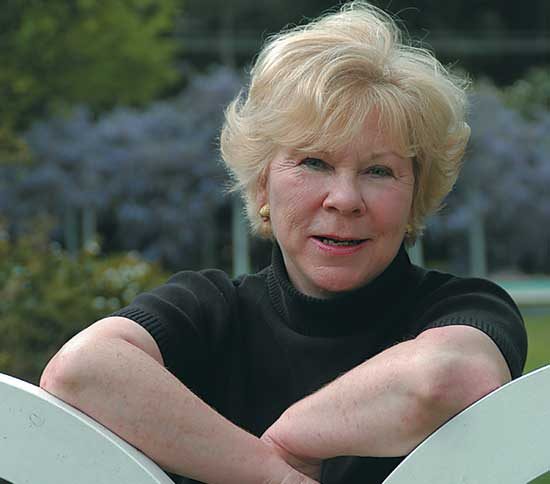 We do a 12- day opera season in the garden in July. My old friend Yvonne Kenny is artistic director. We do two major operas, with two performances each, and then a few other popular concerts and smaller productions. We have our own West Green Orchestra with about 50 players. We sell 500 tickets, and people can choose from a range of dining options, from fine dining prepared by the Royal caterers, light meals in the greenhouse, or a picnic. We set up lovely marquees, each with a chandelier, and a big bowl of flowers on the table, and I have planted thousands of fragrant oriental lilies around the lake, so it smells wonderful. I grow the flowers as tall as I can for the summer so there’s a sort of ‘dormouse’ effect as you walk through the walled garden with the flowers towering over you. Then over the course of the evening the sun sets and we have the garden all lit up. It’s quite a magic time in the garden. 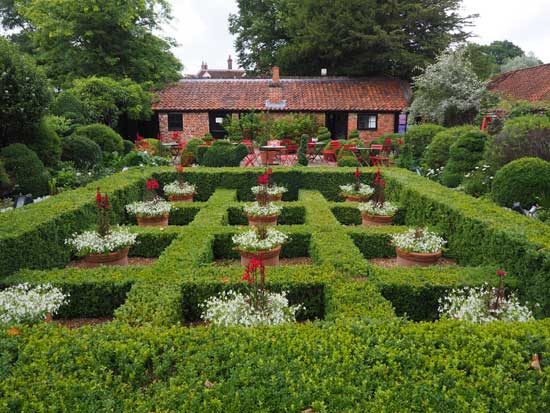 I love that I can grow clematis here which I never could in Kennerton Green because it was too hot and dry in the summer in the Southern Highlands. I had no problem with the evergreen ones, and the small-flowered montana types, but I like them big and blowsy – the bigger the better. I tried everything the books said – I grew them with rocks on top to keep the roots cool – but was never very successful. Here I barely have to try! ‘Perl d’Azur’ is a favourite. It’s medium size and flowers for ever with lavender/sky blue flowers. Unlike most other clematis it is still flowering at the end of summer. I like it with other blues, like Eryngium ‘Blue Hobbit’, nepeta, lavender, a lovely small deciduous agapanthus called ‘Navy Blue’ and the blue Rose of Sharon, Hibiscus syriacus ‘Blue bird’. 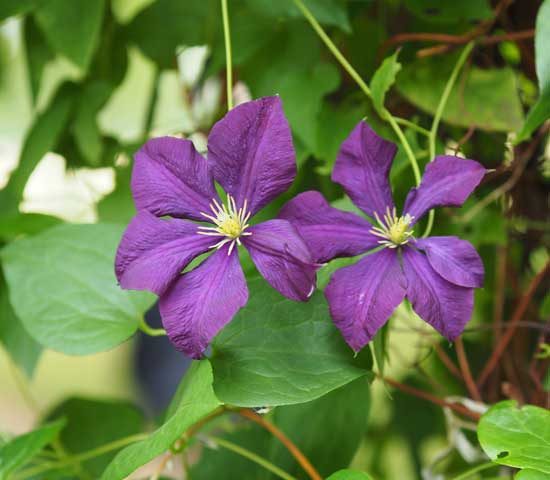 Can you have too many roses! I have to stop, but it’s hard. I was in the south of France with some friends a little while back and saw this rose I hadn’t seen before. Cream and pink and densely packed with petals and deeply fragrant. My friends couldn’t believe that I didn’t know it, but truly I had never seen it before and it was gorgeous. It was ‘Pierre de Ronsard’ and I had to have it. So I carried it home on the plane – sitting in my lap the whole way!
When it comes to roses, I have to have those that aren’t too much trouble. If I had to spray roses I’d have a totally toxic atmosphere. So we look after them by piling in the compost in the spring – most of the fertiliser we use in the garden is simply compost from our own heap. And if a rose – or any other plant – can’t thrive on that I chuck it out. I’m not for these fragile, rare things any more. I’m all for the do-ers!

Deadheading is ongoing at this time of year to keep everything moving.
Mow the lawns – we do it twice a week in the summer.
Clip the hedges – this needs to be done twice in a season. It’s traditionally done first on Derby Day, which is in early June, and then again in late summer.
Plant out dahlias. We keep plants growing in the greenhouse to fill gaps and keep the borders looking good.
Watch the crowds. People find their own way around the garden during the Opera season when we have so many visitors. So I can see where paths need to be widened or changed to accommodate them.
Get the lighting in – we budget for 20 000 pounds to light up the garden for the Opera season. It looks magical.

A wander around West Green and lunch in Marylyn’s greenhouse is a highlight of our Chelsea tour. To find out more call 1300 233 200 for a brochure. Check out the West Green opera program at www.westgreenhouse.co.uk/opera

It’s so revolting and grey here in early spring that you are desperate for colour. The first year I was here I had to go out and buy pots and pots of polyanthus, just to brighten the place up. But now we have tulips, thousands of them. I order 10,000 of them every year and look for ones that are different. When people are paying to come to an open garden they want to see something exciting and unusual. It has to be a show. So I look for the peony types, or the parrot tulips, or unusual colours. I’m into the buff colours at the moment. There are lovely ones, like ‘Belle Epoque’ and ‘Brown Sugar’. I order them in the summer but wait until the first week of January to plant them out – that leaves less time for them to rot and less time for them to be dug up by squirrels or grazed by monkjack, which are like a little mini-deer. I underplant the tulips heavily with wallflowers and pansies. Then they are all dug up and we get a second year out of them in the field. 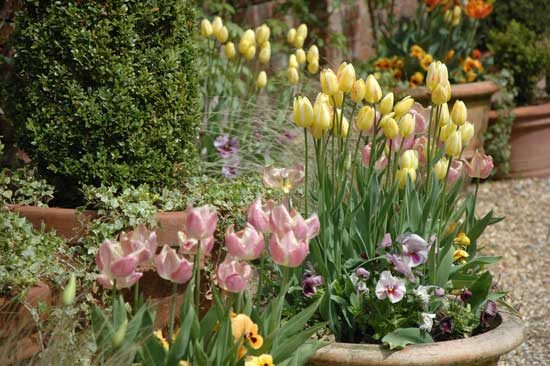 Vatican corner is what I call the part of the big herbaceous border in the walled garden that is all plums and reds and purples. We take out a herbaceous border every year and re-do it. We’ll divide up the plants and put back the ones I like and add some new things. But not grasses. I’m not into grasses. I’ve tried, but they take over so quickly. I like flowers – the bigger the better. 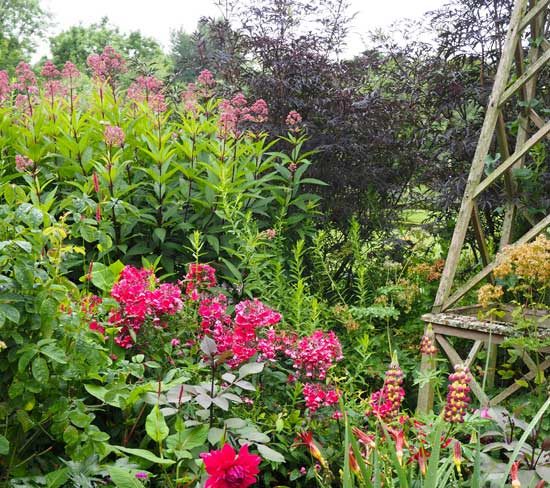