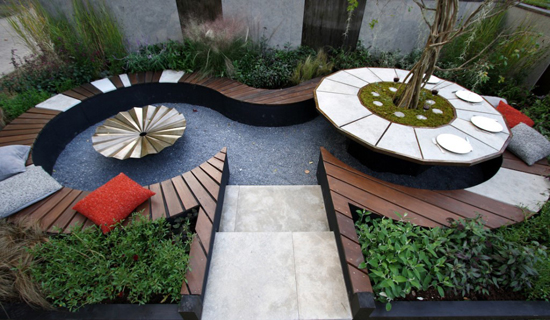 In the Loop: Second at the World Cup

Huge congratulations to Ross Uebergang and his team who recently won second place at the Japan Gardening World Cup! After eight days of intense construction and weather, it was both a welcome surprise and relief that all of the hard work has paid off. We chat to Ross about his incredible adventures and how it all unfolded.

What was it like on site when you arrived?

From not having basic hand and power tools, to starting off in a site that resembled a swimming pool, it was challenging from the get go. Thankfully the first day on site Sean Dowling from Bayon Gardens arrived to help out.  He took a bus straight from the airport to the construction site, put down his luggage, changed clothes in the car and got straight to work.  We had a quick meeting about the safety of some of the elements . 20 minutes later the structure that had been built was being pulled down and we were ordering concrete for that afternoon to start again.  We made a trip to the local hardware store to get some power tools and started preparing the frames with help from Mayhew from Paal Grant Designs who was also at the show.

How was the construction process?

For the whole 8 days of construction we were miles behind the other teams, some of which some had already nearly finished upon our arrival. Things looked they were getting on track by Day 6. I finally found a feature tree from a local supplier and it was craned into the centre of our table an hour later.  But we then were graced with the presence of something that felt a hell of a lot like a typhoon.  We had to finish the frame and then build a make shift tent over the whole site so that we could continue working with power tools and paint.  But the rain was coming in sideways.  We had a huge crew of people holding up covers while 2 people stained timber followed closely behind by a hair dryer.  On the final night we had a crew of about 15 people helping out.  We only started putting the first of the plants in at about 7pm five hours before the end of construction.   We had designers and construction workers from 5 of the different competitors helping out beer in hand digging in the plants. Alejandro from Uruguay was unbelievable support the whole way through.

Did you have to make any changes?

Most definitely, as we expected.  The budget was tiny so I knew that we were going to have to improvise.  Our strength was that we got there just over a week before the end of construction so we had time to touch everything and create work arounds.  It turns out cement sheet doesn’t exist in Japan.  Well at least not in the Nagasaki prefecture.

Plants are always the trickiest part of these things.  I didn’t choose final plant colours before hand because I knew I wasn’t going to know what plants were going to actually arrive on site and I wanted to match it in to them.  We had ordered a still ring to be suspended from the roof for the tree to pop up through.  But the construction team had ordered something that weighed nearly 100kgs, which was going to pull the whole structure down, so we set about making a new one out of plywood.

What was your reaction to winning Silver?

The awards ceremony was like nothing I had ever experienced before. We walked down a red carpet within the gardens, sparkling white in hand, greeted by Ukrainian opera singers before we gave tours of our gardens.

It was such a relief that our garden was finished and we were finally able to just relax and enjoy ourselves.  We sat at our table drinking and eating merrily.  As the awards started to be given out I turned to the English designer next to me and said “What is going on?” Just as I had finished saying this the announcer read out “2nd prize from Australia Mr Rose Uberang”. I turned to the best translator in the world, Ayaka with a confused look.  Her eyes lit up. “That is you!”, she said. I replied, “Are you sure”? I promptly stood up and started screaming. Then everyone at the table joined in! It still hasn’t sunk in properly. And big thanks to my sponsors Eco Outdoor and Prime Designs Metalwork!

What has been the most rewarding part of the show?

As usual it is the people. Your life is made up of a whole lot of days and interactions.  Seeing all the other designers sitting in my garden and actually using it.

Would you do it again?

In a heartbeat.  It’s probably not for everyone though.

What aspect of the experience are you celebrating the most?

For me, it is just going for it and not worrying about the future, or that I am just a little fish in the scheme of things.  This is only the second garden I have finished this year.  But I don’t mind, I am strong enough to not only know that money doesn’t buy happiness, but to also act on it.

I used to work in childcare and one day I was waiting for a student to come to afterschool care who was running quite late.  I stood out on the porch and watched him approach deep in thought. “Where have you been Brodie?  I was worried about you mate, why were you coming from the gate, your classroom is in the opposite direction?”

He looked up at me for a couple of seconds silently and then said “I saw something shiny”.

I stood there and a big warm smile came over me as I agreed that he had done the right thing.

Design is just one part of my life and I am really not interested in waking up in the morning and just battling away at things I don’t care about. I love it at the moment but one day soon I will wake up and not want to be a gardener anymore.

So I am going to learn as much as I can, as quickly as I can and enjoy it until I see something shiny.

The short of it…