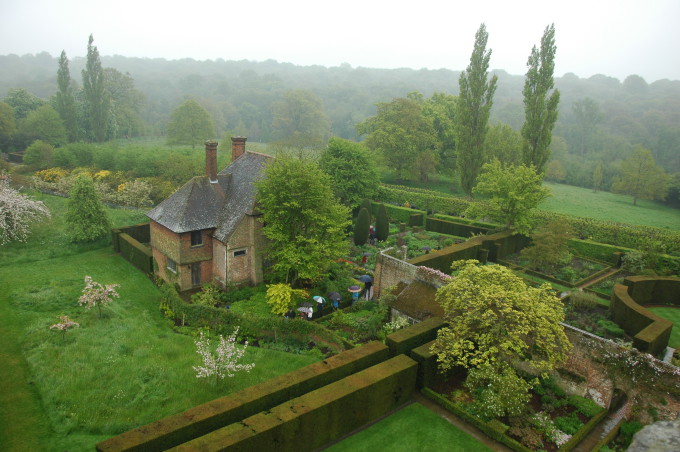 Is Sissinghurst still worth the visit?

Visitors have been gobsmacked by Sissinghurst’s gardens since 1937 where they would put a shilling in a tin, often walking around the gardens as Vita and Harold gardened. In fact they nicknamed the visitors “shillingses” – which I think is half quaint / half caustic, Vita’s humour in a nutshell. 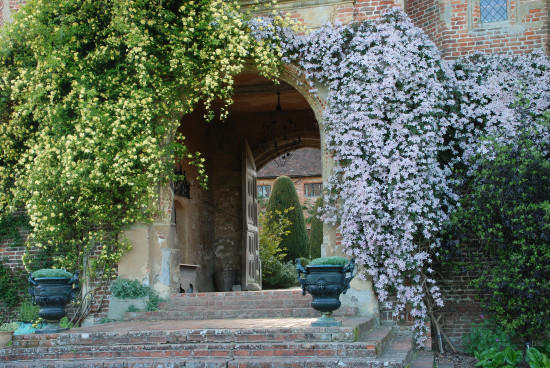 Sissinghurst brings back vivid memories for me, as a buck-toothed 12-year-old in 1985, following Dad, stop, start, from plant to plant. Dad took slides and I jotted down botanic names in my serious copperplate handwriting, in his leather-bound notebook. It was serious stuff. Whether I retained any of that, well who knows! It was osmosis of the best kind. That day remains one of my most awesome childhood days. 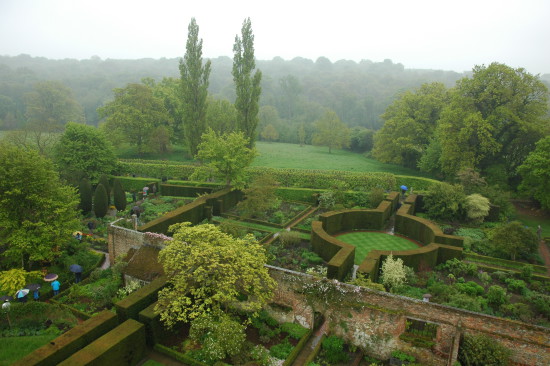 The rooms and compartments are best seen from above. Photo – Linda Ross

Today I love it as much as ever, and never pass up an opportunity to visit the 9 acre English garden, full of postcard moments with its much-copied white room and compartments, carved out of the Kentish woods. Through the decades it slowly stagnated, alongside crumbling walls, almost frozen in time, but now it looks as though the world’s most popular garden has reached a turn in the bubbling brook, resuscitated with new blood and I’m optimistic of a fresh new future.

Sissinghurst has undergone a few major changes, as Vita Sackville-West’s grandson Adam Nicolson wrestled with the integrity of the garden and its surroundings. Many people know Sissinghurst: hailed the most visited garden in the world. The garden resulted from the remarkable fusion of two talented owners; Bloomsbury power-couple, Vita Sackville West and Harold Nicholson.

Vita wrote wittingly for the Observer gardening columns, from her Elizabethan tower, between 1946 and 1961, and in my view her notes are still as great a read today. She wrote with sympathetic ardour about plants and much breezy, witty, affectionate personification. It is sometimes as if she were composing character references, recommending plants for positions in her readers’ gardens. “May I put in a good word for dill?” Or of old roses: “They load the air with the true rose scent… Have I pleaded in vain?” Of Jasminum polyanthum: “I hope I have said enough to stir temptation.” Usually, she has. 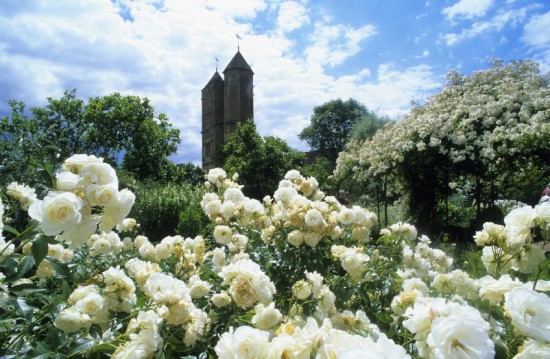 Elizabethan Tower where her writing room remains today through the clouds of white roses in the white garden, June.

Their son, Nigel, inherited Sissinghurst when his father died. Substantial death duties and huge costs forced him to hand Sissinghurst to the National Trust, with the proviso that he and his heirs could remain living there. Nigel lived there and was often seen in the gardens, painting or chatting to visitors.

I visited again when I was 22. I saw him wandering in the South garden, and many of our travellers remember chatting to him in there. He invited me to a National Trust dinner at South Cottage the very next evening – unbeknownst to the National Trust I think! I vaguely remember this being a special 200th birthday event for the National Trust (!!!!), I also remember Nigel not being very interested in it and that’s why we chatted about the garden freely, away from the plumed crowds, standing up, eating our dinner, over the kitchen sink! The girl from the-end-of-the-world having a typical-Saturday-night-chat-session! 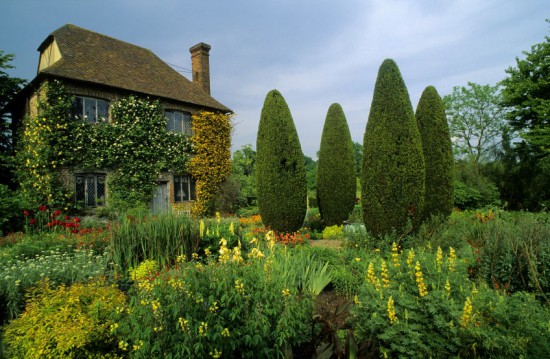 4 Yew pillars stand sentinel in the South garden as it is now with it’s cheery orange and lemon colour scheme. Photo – Photolibrary

Vita writes, “Cram, cram, cram, every chink and cranny … I like generosity wherever I find it, whether in gardens or elsewhere … Always exaggerate rather than stint. Masses are more effective than mingies.” I completely agree! 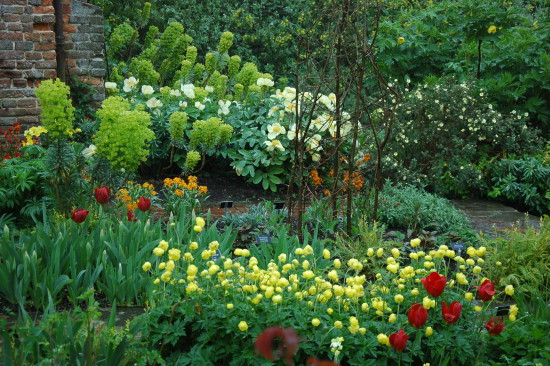 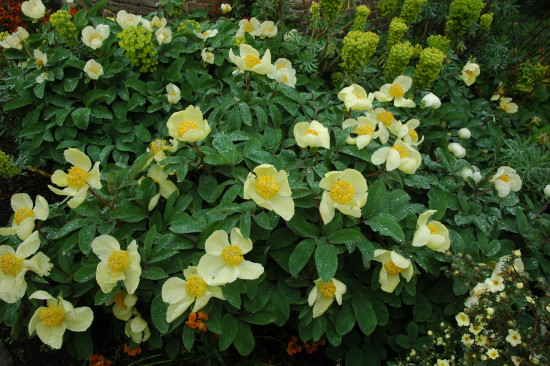 When Nigel died in 2004, his son, Adam and his wife Sarah Raven and their two children, moved into Sissinghurst – albeit part-time. Adam arrived with a vision to reconnect Sissinghurst and its famous gardens to the surrounding landscape that he fondly remembered as a child. He had explored every corner of the estate when he was young. This was the farm that had sustained his family and its tenant workers, who grew wheat, oats, barley, peas, apples and hops. He had kept a diary and listed his daily chores: ploughing, harvesting, hedging and shooting (rabbits).

The rooms and compartments are best seen from above. It’s possible to walk alongside the moat, the only remaining part of the original Saxon manor house, the first recorded building on this site and look across the orchard to the medieval tower that forms such an integral part to the garden. Photo – Linda Ross

But the farm had been abandoned and Adam felt that Sissinghurst had lost its soul. No longer could he look beyond the garden to the ploughed fields and animal enclosures he remembered.  The fields were barren and unproductive; there was no unity between garden and farm. Adam had a ‘remembered’ sense of the extended family around him as a child …“the people of the house, the farm beyond it and beyond that the woods and lanes of Kent, the onion skins of my world”, he writes in his book, ‘Sissinghurst: An Unfinished History’. Adam wanted to “rekindle the sense of this place as a fully working and integrated whole”. The garden, he believes, had become too perfect, and isolated from the community around it.  Sterile canola fields had replaced the farms of his childhood; and he wanted to restore soil integrity with mixed farming. 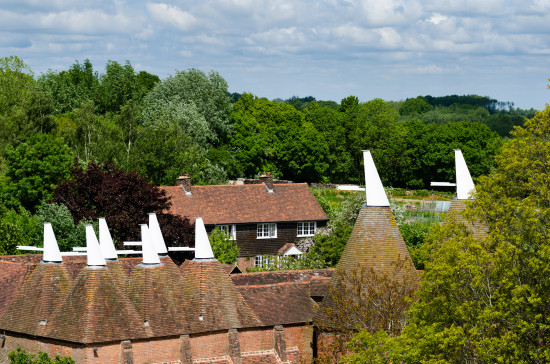 Under the management of the National Trust, Sissinghurst has become a very successful business. Almost a shrine to Vita herself, and most visitors climb the tower to see her private studio, to which she retired to write. By 1990 there were 100 paid employees managing 200,000 visitors a year. Timed tickets were introduced to limit the number of visitors in the garden at any one time. It was a thriving operation and the Trust management committee was reluctant to change anything. 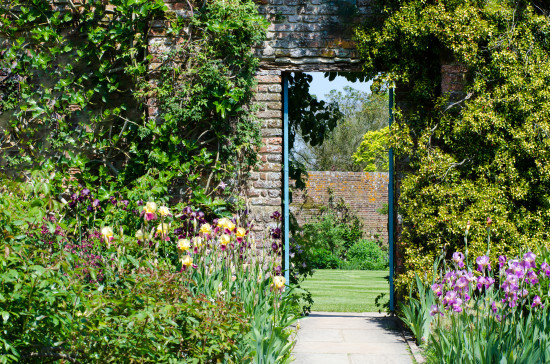 So Adam prepared a plan, which he duly presented to the Trust. The initially frosty reception to the idea was not promising but finally the Trust has given cautious approval to a limited version of Adam’s plan. He integrated the farm with the garden and in particular the restaurant. His wife, Sarah Raven, is particularly interested in this aspect of the plan, because of her own kitchen garden school at nearby Perch Hill. Sarah worked with a committee of the Trust to update the menus in the Sissinghurst restaurant to showcase fresh, tasty, Sissinghurst-grown organic produce, instead of dull National Trust fare.

Adam’s dream of reintegrating the farmland beyond this most famous garden is happening as is major overhaul within the garden.

Troy Scott Smith, 42, was awarded the role of head gardener in 2013, the first male head of a plot famed for a succession of outstanding women. After Vita came Pam Schwerdt and Sibylle Kreutzberger, then Sarah Cook and Alexis Datta. He moved into a cottage in the grounds, along with his wife Anne (also a gardener), their children Rowan, five and Maiwen, three, and Moss, their Welsh springer spaniel puppy. It is a considerable change of scene from the mountains of Snowdonia, where Troy’s previous job was head gardener at Bodnant in Conwy.

The garden will be now open in December. Troy is thinking of making a new winter garden. “Vita loved winter flowers and the area behind the lime walk would make sense. For me, that position has some merits, given it is open to the light and is adjacent to the lime walk, which is a spring garden. It is an area that could be ignored for the rest of the year.”

Adam supports new ideas. “I’m all in favour of not thinking Sissinghurst is over, that it has to stick in the past. It will be exciting.” 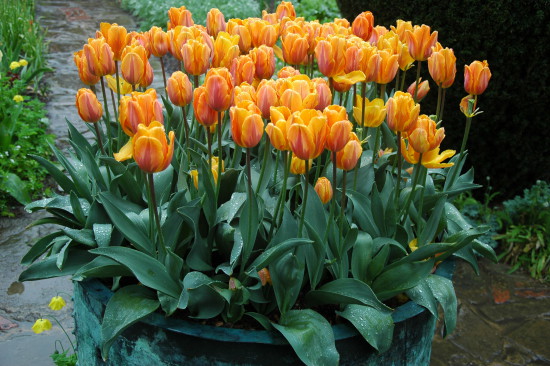 I well remember my first ever visit to Sissinghurst.  It was April 1991 – the year that visitor numbers reached their all-time peak – and a Sunday morning, immediately after opening time.  We virtually ran to the Lime Walk, which is at its best in that month, and for a few minutes were the only ones there.  The Lime Walk was what Harold Nicolson, it’s creator, called ‘My Life’s Work’.  First, he’d designed the layout (as he did for the entire garden) and then began to ‘decorate’ it with spring bulbs, timed to flower in one overwhelming moment.  Decades after his death, it was still overwhelming.  There were hybrid and species tulips, all manner of daffodils, whole sweeps of fritillarias and carpets of wood anemones.

I went back five times over that spring and summer; always on a Sunday morning to beat the crowds, and on every visit, there was always so much happening that you left convinced that you’d seen the garden at its climax.  But it just kept getting better!

All this was nearly 30 years after the death of Vita Sackville-West, Harold’s wife, and the initial creative genius behind all the detailed planting in the rest of the garden. In her final years, Vita had appointed two women head gardeners, Sibylle Kreutzberger and Pamela Schwerdt, and they continued there until 1990.  They were the real force behind the astonishing planting that held me spellbound for that summer.  Increasing visitor numbers had meant that much of Vita’s romantic shagginess had had to be pulled into line, but what it had lost in romance since her passing it had gained in horticultural sophistication and successional planting brilliance.

I returned in 1994, and managed to visit outside of hours on a mid-summer evening.  I was standing in the white garden, then heavily in bloom, as the clock in the famous fairytale tower struck nine.  Any time I want – even without closing my eyes – I can be back there, in that very moment.

Adam Nicolson’s ‘Sissinghurst – An unfinished History’, or hunt down the BBC TV series of the same name.

Oh yes, we visit Sissinghurst a couple of times each year, come with us!