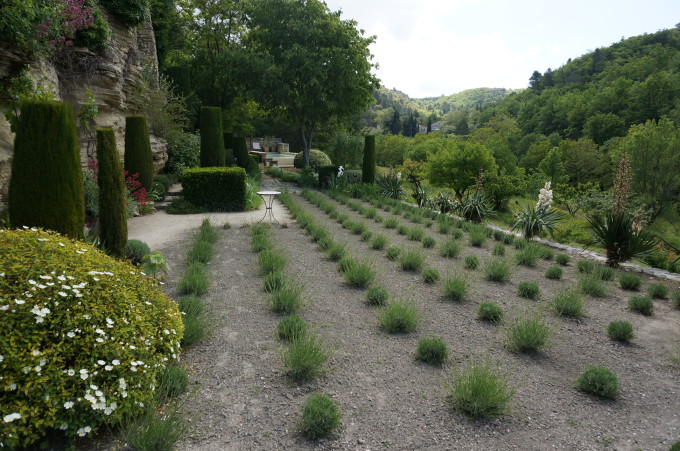 La Louve, a garden in Provence

La Louve is what happened when fashion designer Nicole de Vesian turned to garden design. Judith Pillsbury, the art collector who now owns La Louve, calls her it her most important work of art. Peter Whitehead visited last week with a group of Ross Garden Tour travellers on a tour of France and sent this report. 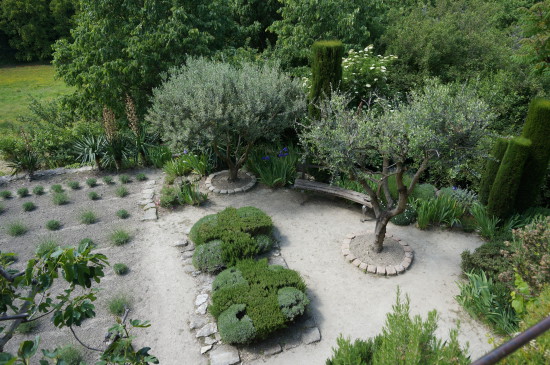 “I thought you might like to see some pix of one of the most exquisite gardens I’ve ever seen. We were in the village of Bonnieux in the Luberon valley of Provence to see La Louve, the garden originally made by Nicole de Vesian.

The garden is set on a series of terraces and is designed by be in harmony with the surrounding natural landscape of the Luberon.  It’s only small, and given the poor soils and harsh climate (baking hot and dry in summer and cold in winter) plants have to be tough. Clipped yew, buxus, eleagnus, cotoneaster, rosemary, santolina and lavender are all clipped and shaped by hand (apparently Nicole clipped some of them with nail scissors!). There’s not a lot of colour – some splashes of valerian, cistus, yucca, the occasional iris, and coming soon  – white roses, and all the lavender, planted into rows in a gravel bed as you can see here. 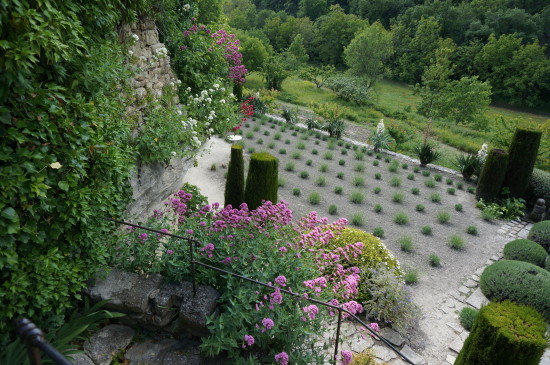 It was lovely – the place has a serene tranquillity and every little nook and cranny has a delightful feature or vista to the next level.

Nicole de Vésian set up as a freelance stylist after the war and then designed at the House of Hermes, (where she worked alongside a young Christian Lacroix!). After the death of her husband in 1886, at the age of 69, Nicole gave up haute couture for horticulture and created La Louve, (which means she-wolf). The garden became famous and Nicole found herself with a whole new design career.  A decade later she sold the garden and moved to a flatter space, and since 1996 Judith Pillsbury has been La Louve’s mistress. 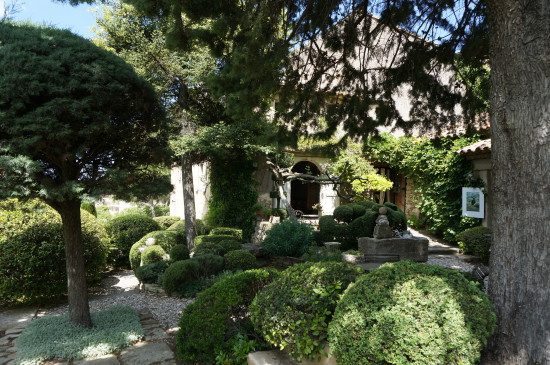 Judith is an American-born art-collector with a love of gardens.  She wanted to preserve what Nicole had established but also put her stamp on the garden. She showed us around and was a charming and gracious hostess.

The garden offers numerous pleasures magically wrought from dry and stony soils. We loved the belvedere with its prospects of the valley beyond; an old cistern converted into a plunge pool, partly shaded by a quince tree; and the east-facing kitchen terrace with ancient stone basins and meticulously clipped shrubs arising from a sea of river pebbles. 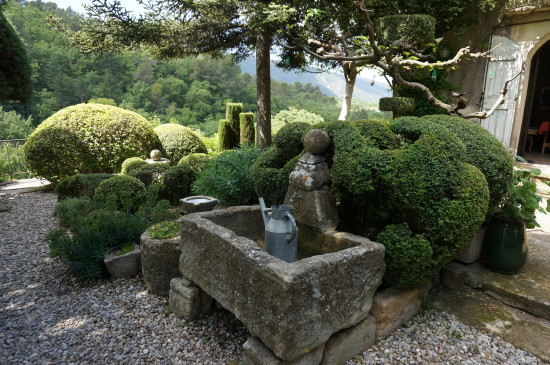 Why did we like La Louve so much? The unanimous answer was that it was so personal. It is an intimate garden with secret surprises at every twist and turn. The planting was very simple but very clever. Having Judith herself show us around made a huge difference.  She was a wonderfully generous hostess and served us an elegantly simple and delicious lunch, which we ate on the terrace beneath an ancient pine tree. We were treated to Provencale specialities, with chilled rose wine and a bowl of cherries for afters. Perfect.

Our visit had me thinking about gardening in a harsh climate.  It was amazing to see how much creativity, and serenity, could be wrought with a simple palette of plants.

And one more thought, I think we water too much – I certainly do!

Nicole de Vesian took much of her inspiration from Japanese gardens, which use a limited plant palette – and lots of work from the gardener! – to create serene spaces of plants, rocks and landscape. See how it’s done on Graham Ross’ tour of Autumn in Japan at Chrysanthemum Time.