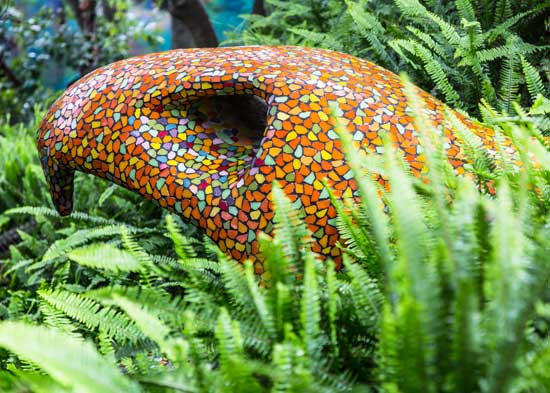 Nest of the Feather Serpent

Linda finds a garden in Mexico that sparkles with surprise and joy.

The feather serpent is an ancient Aztec and Toltec mythical being that you see represented in many ancient sites and artworks in Mexico. The god was related to the planet Venus, to dawn and winds, to knowledge and art; it brought good tidings and civilisation to humankind. Whole cities were built as centres of worship for this deity. The most famous example of ancient feather serpent worship that still exists is the so-called pyramid (Mexicans prefer the term ancient site) of Kukulan at Chichen-Itza, in the Yucatan. On the spring and autumn equinox a perfect image of a plumed serpent is drawn on the stone stairs – in moon shadow! It’s spine-tingling. 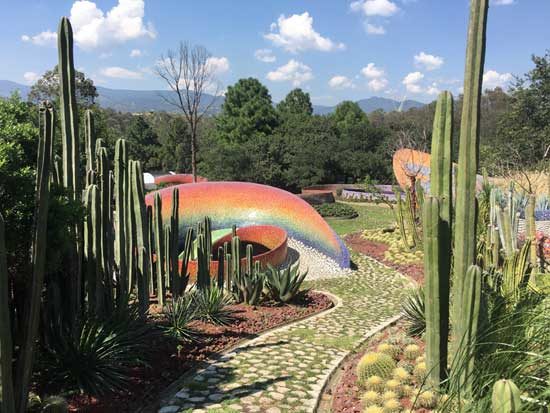 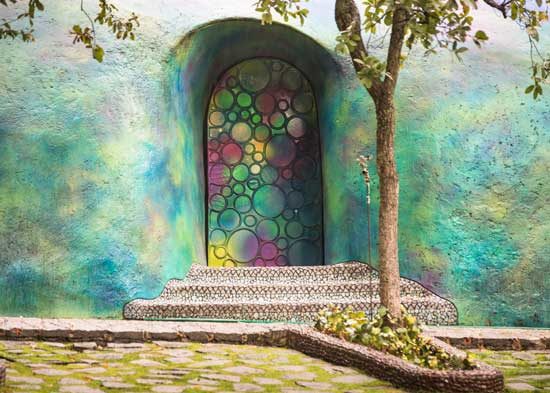 So you can imagine my excitement when I found out about a modern Mesoamerican garden called Nest of the Feather Serpent, designed by Mexican architect, Javier Senosian, who is renowned for his site-specific, serpentine architecture.

We set out early from Mexico City, a vibrant, cultured city of 12 million, and as we day-tripped out, millions of Mexicans living in satellite suburbs flowed in. Mexico City has a fascinating geography. The Spanish built the modern city over the ruins of the Aztec capital, which was on an island in a lake. Over centuries the lake was drained and Mexico City expanded. Before the conquistadors, the city lay low on a network of canals over an ancient lake bed, with the ever-present volcano smouldering on the horizon. I tried to imagine the pre-Columbian landscape of feather serpent worship as we drove north-west to a lush mountainous ravine in Naucalpan, and the garden. 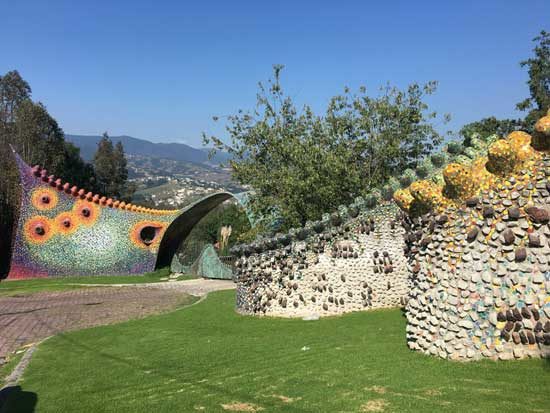 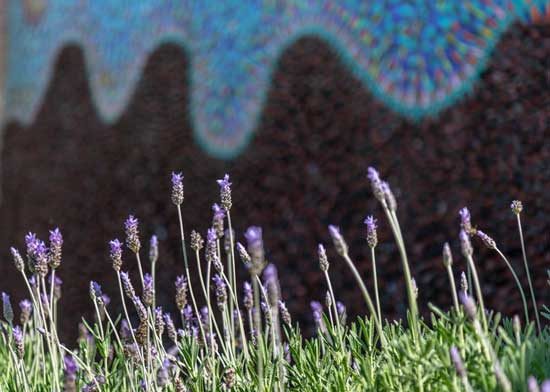 An intense wall of brightly coloured mosaic and giant plumes of creamy pampas grass offered the thrill of arrival and sparks of anticipation at the front gate. The garden starts high and cascades gently to the valley below. Traversing its contours felt like slowing spiralling downwards into a giant nest. Along the way  panoramic views contrasted with hidden tunnels in a  play between light, open expanses and closed, shadowy stretches.

The garden could be described as a park-like series of flowing spaces incorporating various buildings, corridors, labyrinths, butterfly gardens and cactus collections. But to explain it that way misses the shifting emotions generated by the garden through the rise and fall through light and shade; the surprise of glowing serpentine mosaics; the feel of the hot Mexican sunshine; the ethereal sight of clouds of vivid butterflies; the sound and sparkle of flowing water; the sense of anticipation as we neared  the ‘heart’ of the nest. 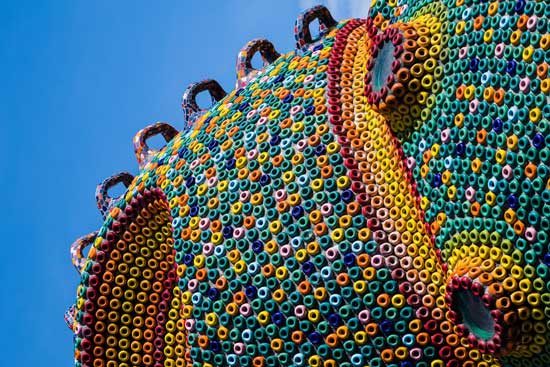 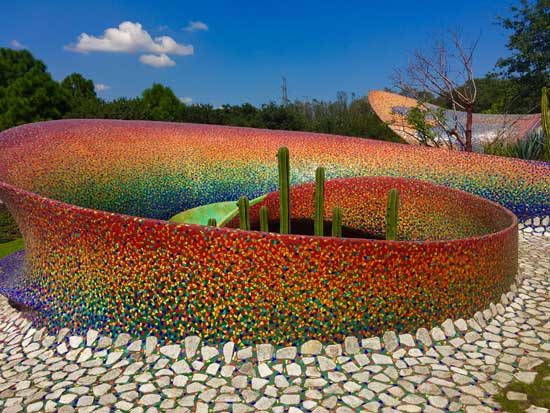 Our surreal, highly emotive walk through the valley culminated in the sight of a twisting, four-storey serpent lying coiled in its nest, its shimmering teal-green tiled form reflected in a still body of water beneath it. Then we heard a child cry and saw people peeking down from high circular windows: people were living in the serpent! A quick Google search revealed the eight rooms in the serpent are available to rent on Air B&B.

The trippiest part of the visit though – even trippier than a giant four-storey hotel serpent –  was behind a magical rainbow door. The door led into a mosaic tunnel, one a giant psychadelic earthworm might inhabit. The light at the end of this tunnel was a shimmering room of water. There we were offered a cup of cold cucumber sticks sprinkled with chili and salt, which turned out to be just what we indeed needed to come back to earth. 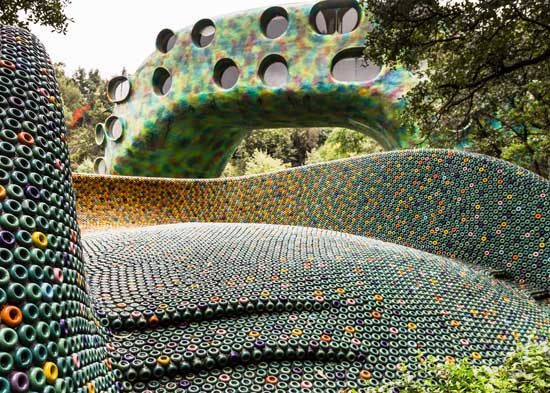 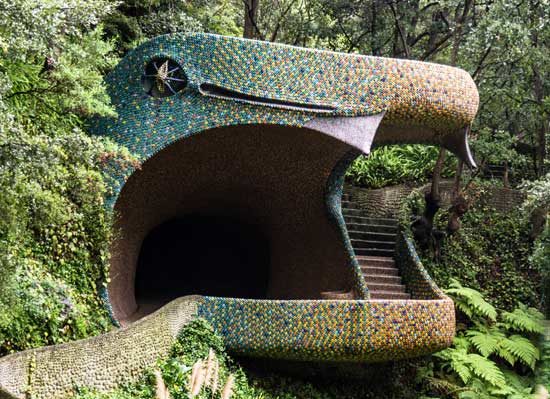 The tunnels, rainbow mosaics, secret doors, bridges and water gardens create a vibrant energy flow through the garden and generated a contagious, childlike sense of wonder and joy. We all felt invigorated, uplifted, energised. It is a magical place;  a garden fit for an Aztec god; a place where an ancient and mythical plumed serpent could come from the past and excite the present.

Linda is returning to Mexico and Cuba in October this year. Call 1300 233 200 to request a brochure. 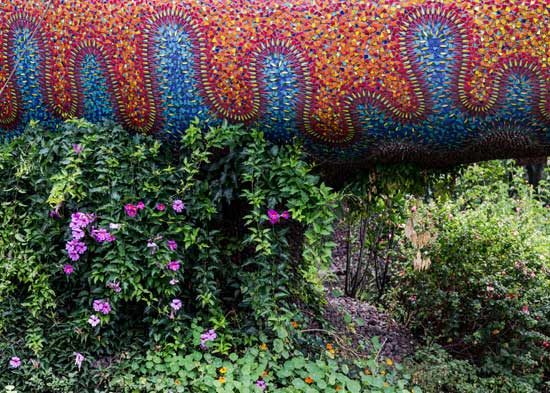