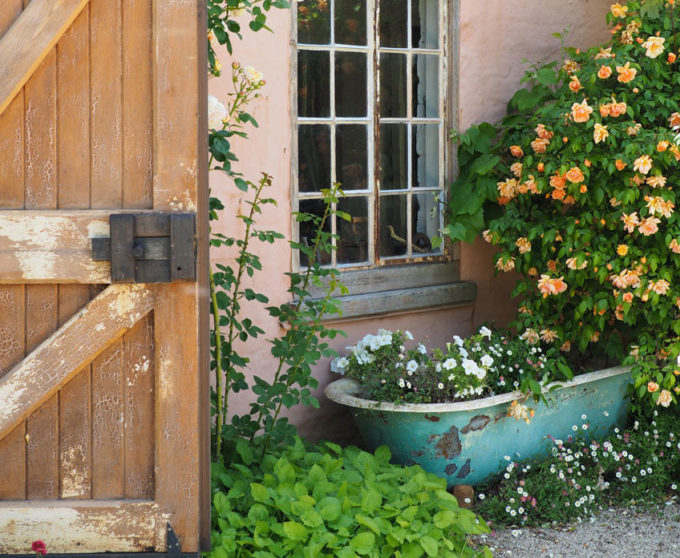 Marian Somes sums up her garden philosophy as ‘Let it rip!’ And it does.

In spring, when I took a group of Ross Garden Tours travellers to visit Marian’s garden Picardy, it was a riot of flowers.

The roses were in brilliant, fragrant bloom and beneath them bearded irises stood proud above blue and white nodding aquilegias; sweet peas scrambled between the roses and lounged over the paths; blue forget-me-nots had clumps of white species gladiolus surrounded; and everywhere sparks of bright orange Californian poppies sparkled in the sunshine. Marian says she hates to see bare earth, and there’s not a skerrick to be spotted beneath the tumble of plants.

The incredible surprise about all this mad growth and effusive flowers is that it is almost all self-sown. With the exception of a few punnets here and there, Marian lets the garden do its own thing. She let’s it rip. It’s a philosophy not without its stresses. The straggly, overgrown end of a plant’s life must be endured til it sets seed. No tidying early. And each winter Marian admits there’s a moment when she almost loses faith. She looks out over the garden in mid-August and can’t stop the nagging feeling that this year it might not all work. “I rush out to Bunnings for a super-sized punnet of something and plant these little seedlings,” she says. Then a few weeks later the growth takes off, “and I can’t even see where I put them!”

The valerian, aquilegias, forget-me-nots and iris of spring are followed in summer by gaura, salvia, shasta daisies and dahlias, as well as self-seeded linaria (toadflax). The garden isn’t mulched so that those fallen seeds can find a patch of soil to call home, but it is fed. Marian uses Seamungus pellets in early spring, just as the growth is starting to explode. Weeds self-seed too and Marian has decided to welcome some of the wild oat grass that arrived in an early load of horse manure and is now a fixture in the garden. She removes some of it as it appears at the end of winter, but leaves more as she likes the effect of the grass heads in amongst the flowers. 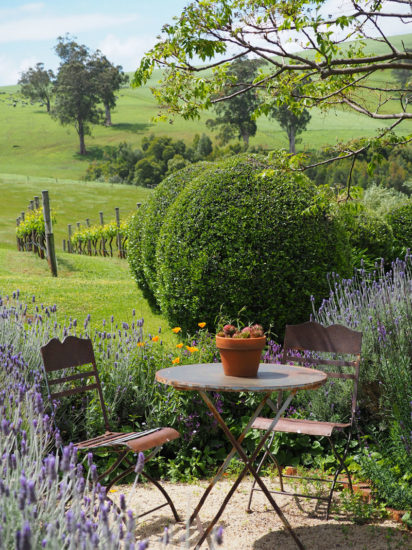 Marian and her husband Bryce describe themselves as Francophiles and it was their honeymoon in France that first had Marian dreaming of a French-style house and garden. “We wanted to live in the south of France, but didn’t want to be so far from friends and family,” she explains. The home-grown solution was a property in the Gippsland hills in Victoria, with bucolic rural scenes in all directions and best of all – a spring-fed creek. In 1992 the Somes started work on a symmetrical, two-storey, French-style farmhouse, forming it out of bricks made from rammed earth. The earth gives the house the colour of stewed apricots swirled through cream, an appropriately romantic tint, matched by the wild romance of the garden.

The confusion of plants could look like scribbling it it wasn’t tightly controlled within lines formed by perfectly clipped privet hedges, gravel paths, brick-edged beds, and strong axes that link the garden to the house. The front parterre, hedged in privet on one side and lavender on the other, is backed by a fence of espaliered apples. An archway opens into an avenue of crabapples, which in early spring is carpeted with white daffodils and Dutch iris. 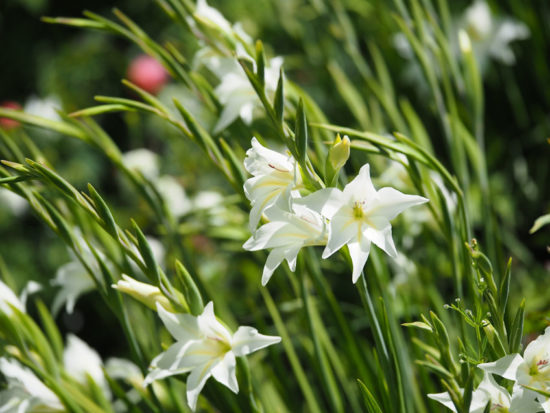 The formality loosens as you move further from the house. There’s a walk beneath pink-flowered false acacias (Robinias), whose dappled shade is Marian’s attempt to recreate the light in the French countryside. At the back, a small, gravel-floored terrace is encircled by lavender. An iron café table and chairs is the perfect spot from which to look out over the vineyard and towards a grove of olives.

In a garden this big, Marian has had to prioritise where she spends her time. Five years ago she decided pulling out spent annuals and weeding in the coldest part of winter was not what she wanted to do. Instead she lets the garden have its head, taming and planting only what is necessary to maintain the romantic chaos in pleasing order. The result is a garden with an irresistible charm.

Ross Tours leader, Carolyn Dwyer will lead the Inside Victoria tour this November. Picardy will be one of the highlights. Interested? Call Royce or Ros at Ross Garden Tours on 1300 233 200. 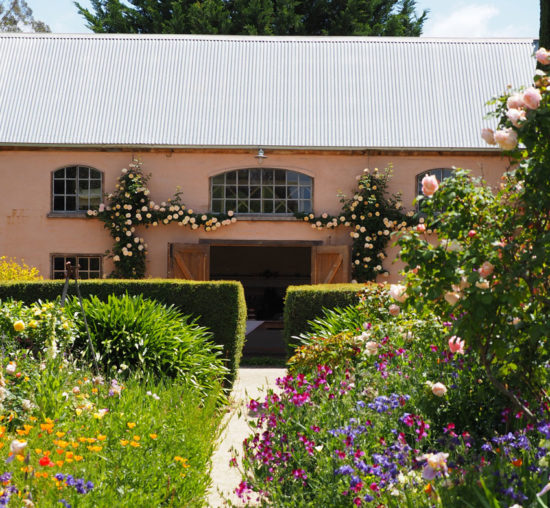 Marian grows a fragrant bi-colour that scrambles around and over the roses. They are pulled out if they threaten their neighbours, but are otherwise cut back to the ground once the seed has fallen. 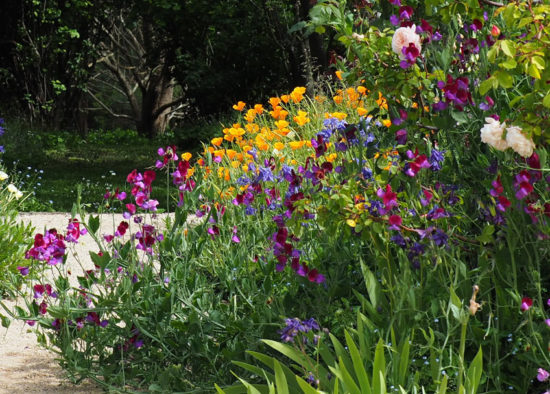 These happily self seed through the shadier parts of the garden, forming a soft haze of tiny blue or white flowers. 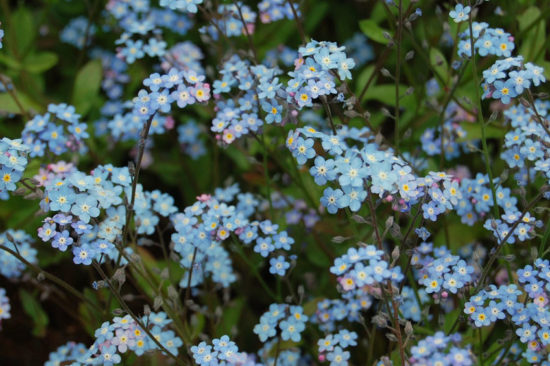 Granny’s bonnets self-seed well and the garden features many colours and forms. They are cut back at the end of spring, and push up fresh ferny growth that looks pretty through summer. 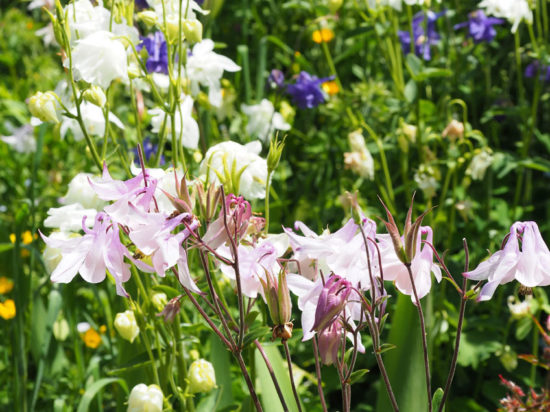 Though Marian has tried to spread the pink form of this sun-hardy, long-flowering poppy, she has found that is the orange form that is toughest and most dominant. 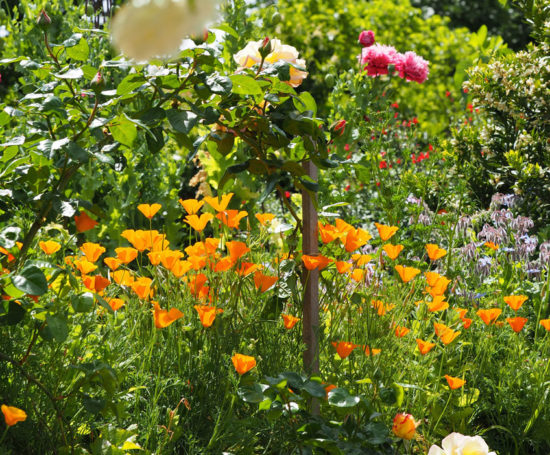 Seaside daisy pops up around paving and seats and Marian loves its soft-coloured flowers. She cuts it ‘back to its socks’ when it starts to look too straggly. 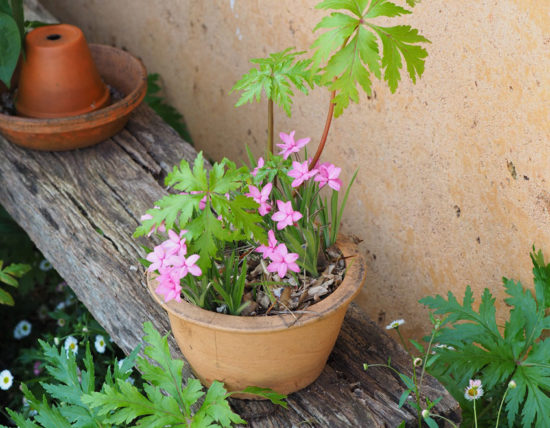 The chunky spires of valerian, Centranthus rubra, are seen all through the garden, in shades of cerise, pale pink and white. Doesn’t like humid climates. 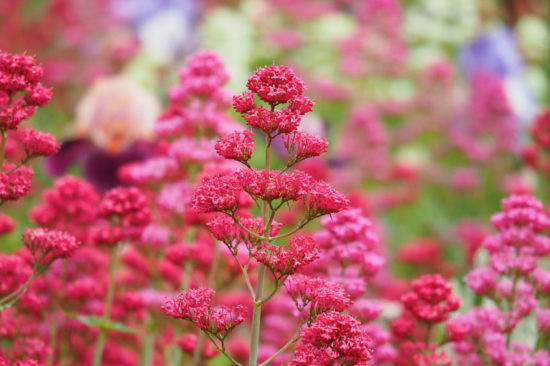