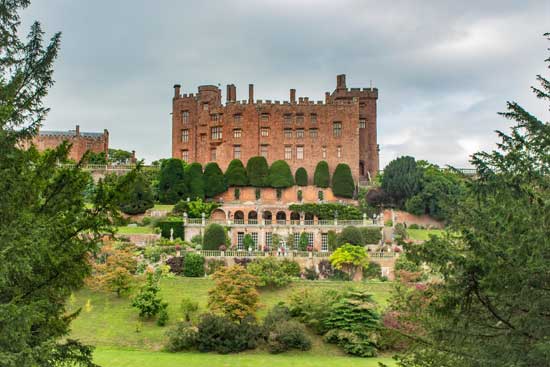 Powis Castle is a medieval fortress and grand country manor of striking red limestone that perches on top of a hill. Its crenelated battlements reach into the clouds and its mullioned windows overlook Italianate terraces planted up with fine herbaceous borders.

From the lake-like lawn at the bottom of the hill the castle appears to be resting on lumpy cushions. The are giant yews, planted as a hedge in the 1720s. The intervening centuries have allowed them to bulge and slouch and become their individual selves, rather than a single well-behaved entity. They’re called tumps, and look like giant green bean bags balanced on the weathered red brick wall. From their vantage point they have watched 400 years of history and garden-making play out in the grounds of Powis.

When they were originally planted the yews were clipped into small, formal cones and pyramids. But then fashion intervened, in the figure of Lancelot ‘Capability’ Brown. Brown refashioned the English landscape, tearing out formal gardens to replace them with naturalistic landscape parks of water, trees and green spaces that came right up to the doors of the house. In Wales, one of Brown’s enthusiastic followers was William Emes, and he was employed to make the necessary improvements at Powis to bring it up-to-date. Emes added the typical Brownian feature of a copse or line of trees silhouetted on a ridge by a planting up what he called The Wilderness, but fortunately left much of the older, more formal, parts of the garden intact.

A yew hedge as crooked as an arthritic finger points the way downhill to an orchard of heritage apples and pears. Photo – Colin Barlow

Within the landscape vision however, hedges were ‘so last century’, and the yews were allowed to grow out of their constraints and take on more natural, tree and shrub-like forms. Or at least they were until formal gardening made a fashion comeback in the late 19th century and the garden came under the control of Lady Violet, wife of the 4th Earl of Powis.

Lady Violet came from a family of keen garden-makers and in 1911 she persuaded her husband to entrust the entire management of the deteriorating gardens to her. She refreshed the planting, relocated the unsightly kitchen garden, added Edwardian features, lots more flowers, and got the yews back under control.

This layered history of garden-making makes Powis a particular gem. The flower gardens and borders are lavishly beautiful, the ancient apple orchard is romantic and the statuary is impressive, but the image that stays in the mind is of the yew tumps, balancing the bulk of the castle with their own heaving mass.

The yews are trimmed in late summer and autumn, a project that takes the team of gardeners months to accomplish. Two gardeners spend 12 weeks on the yews, one on the ground, and the other doing the high trimming from a hydraulic cherry picker. This safety-approved approach is a great improvement on previous times, when the hedges took 10 men four full months to clip, using hand shears. Pruning was a perilous business, with the gardeners balanced on very long ladders, tied together where necessary, to reach the top of the taller yews.

Powis’ collection of yews and their fine organic shapes are one of the great wonders of the gardening world, but in recent years they’ve also become medical wonders. Yew leaves and seeds are notoriously lethal if ingested, but it turns out the poisonous alkaloid in yew contains some useful chemicals, specifically the active ingredient for the cancer drug called taxol, which is used in advanced breast cancer, and which is named for the trees which provide it, yew, Taxus baccata.

From the bottom of the hill it’s clear why the trimming of the yew and the hedges takes the Powis gardeners months to finish! Photo – Rosesmith / Shutterstock

The wonderful old yews of Powis are powerful symbols of survival, not just in the turbulent history they have lived through, but in their contribution to the survival of so many women, including, as it turns out, me.

Interested in visiting Powis Castle, and other gardens of Northern England, Scotland or Wales? Call Ros or Royce for details on 1300 233 200, or go to www.rosstours.com.