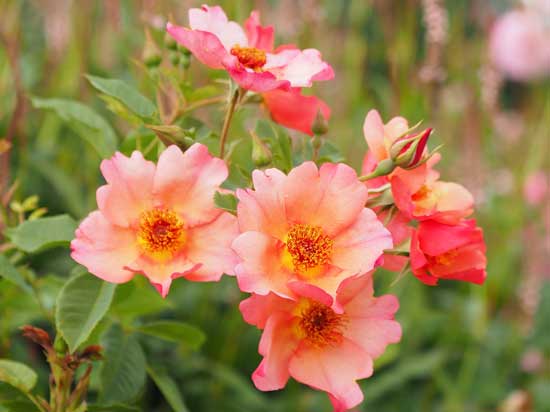 There’s a spicy smell of rose in the air, and the sound of happy bees. Full-petalled pink blooms decorate a rose bush that reaches over over my shoulder. At its feet brilliant daylilies open their throats and the large-flowered blue geranium ‘Rozanne’ holds flowers trembling a little in the breeze. At the back of the border a tall single pale pink rose forms a wall of bloom with abelia, and above the roses a young ginkgo is starting to stretch up to the sky. Behind a bank of bronze-frilled rudbeckia a cloud of grass plumes catches the afternoon light and sends it in glittering shafts back to the roses. It’s so lovely I never want to leave. 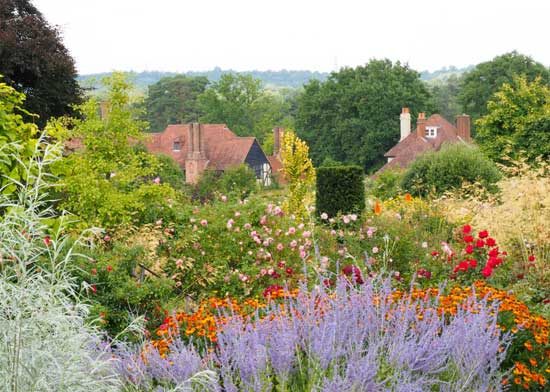 This is the New Rose Garden, as practised at Wisley, the Royal Horticultural Society trial garden just south of London. This rose garden, with its swathes of supporting plants, ordered and clipped evergreen pillars, and great mounds of colour and texture is a far cry from the traditional monocultural rose garden, in which plants are displayed like so many sweets at the lolly counter, each in its own separate spot.

The 21st century rose garden puts roses back into a larger garden context, and the Bowes-Lyon Rose Garden at Wisley captures the romance, beauty and sheer exuberance of this new approach. The aim of the garden, which is named for Sir David Bowes-Lyon, RHS President from 1953-61, and opened in 2011, is to inspire visitors with its plant combination, demonstrate best environmental practice and encourage biodiversity. 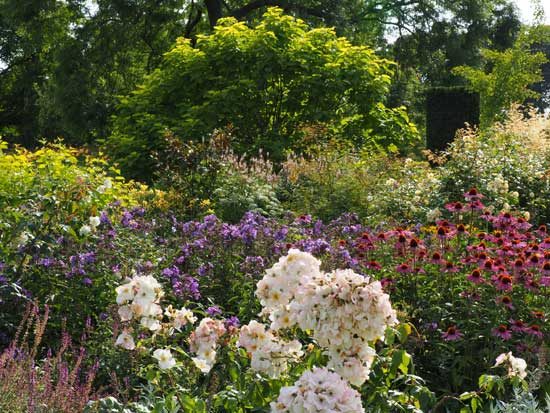 Landscape architect Robert Myers, who has been awarded multiple gold medals for his show gardens at the Royal Horticultural Society Chelsea Flower Show since 2007, reformed the beds of the old garden. The slope is now terraced with shallow steps that lead up to the Bowes-Lyon Pavilion. Sinuous footpaths wind through the gardens so that visitors are faced with ever-changing views of colour and texture sweeping before them. Benches are tucked in, surrounded by blooms, with views over flowers and foliage to the  mellow red-brick chimneys of the laboratory.

The Wisley gardeners worked with David Austin Roses and Harkness Roses to choose a range of pest- and disease-resistant, repeat-flowering roses, including climbers and ramblers. There are  5,000 roses in the garden,  planted in a colour wave that starts with yellows, moves through whites and creamy buff tones to fleshy pinks, and on through darker pinks to rich reds and burgundies near the pavilion.

Interwoven through the roses are more than 4000  herbaceous plants, repeated to give continuity to the design. They include salvias, rudbeckia, agastache, geranium and sedum.

Rhythmic groups of the ornamental grass Stipa gigantea and silvery coyote willow, Salix exigua, pull the design together along the steps. Swathes of fine green lawns make a visual breather to all the colour.

The new planting has had an environmental impact. Emma Allen, Garden Manager (Formal and Decorative Display) at Wisley reports that interplanting with herbaceous perennials has reduced the pest and disease build-up in comparison to rose monoculture, reducing the need for control methods, including spraying.  As well, the range of flowers of different shapes and forms, and the longer season of blooming offers more pollen and nectar and has increased the foraging activity of insects including bees and butterflies.

From a visitor’s perspective, the new garden is a dream, and as the late summer sun backlights a lovely coppery rose, it’s only the imminent closing time that drags me away.

Wisley tips for planting with roses

1.Ensure a good planting distance around the rose, so that the base of the rose is kept clear of herbaceous perennials.  This also allows you access for deadheading in summer.

3.Choose herbaceous perennials that aren’t too difficult to control in your space. For example, daylilies, Hemerocallis, are quite well-behaved, whereas Peruvian lilies, Alstroemeria, can spread quickly and root deeply.

Which is more effective in producing more roses and quicker flushes – cutting off spent flowers just above a leaf, or snapping them off by hand, just below the head?  Wisley and the Royal National Rose Society conducted trials and the results are in – snap those deadheads!

The rose garden at Wisley in full bloom is just one of the rosy treats in our new Rose Gardens of England tour, timed to hit the peak of early summer bloom in late June.  Find out more at www.rosstours.com or call Royce or Ros on 1300 233 200.