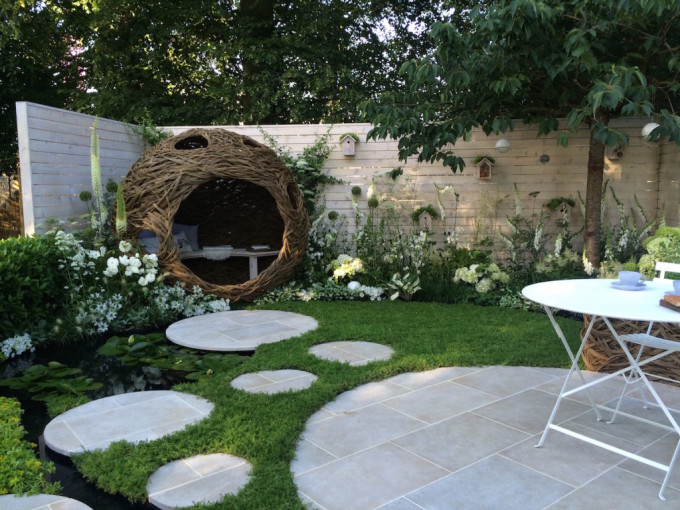 With perhaps one of the best backdrops to a garden show there is the RHS Hampton Court Palace flower show is the largest annual event of its kind anywhere in the world. Spread over almost 50 acres of farmland with the Palace in the background and with the famous Longwater running through it this show is a favourite for many exhibitors and visitors. Unlike it’s older sister Chelsea you can actually buy plants here and exhibitors like the high summer selection of plants that they can use to create many a quintessential English garden.

This year the show is 25 and there were celebrations of this milestone whilst looking ahead to a future which promises even more gardens. The 2015 show has over 40 gardens and features that bring together generations of gardeners from school groups with the scarecrow competition, to rookie show garden designers and more experienced exhibitors. This is where you can experiment with ideas and hone your skills in showing gardens, sometimes on a budget and often with sponsorship from some top UK brands.

The show gardens and world gardens are always a hit but for me this year the summer gardens stood out as the go to place for inspirations. Five gardens, all created by women and all in their first outing at show gave us ideas for outdoor living from the sunken garden of VaRa design to the coolness of the white planting by Sarah Keyser in her garden for birds. The winner of the best in show by Juliet Hutt exuded confidence in its use of big scaled up hedges, Aesculus parvifolia and mirrors that told the story of her charity QEF sponsor.

A new section for this year was the historical gardens of which there were three commemorating events such as Anthea Guthrie’s start to the Winnie the Pooh stories. In this section the planting by Frederic Whyte for Amnesty International celebrating the 800th anniversary of the signing of the Magna Carta was one of the show’s highlights. It’s never easy to get yellow to work well in a garden but Freddy’s string palette offset with greys and blues proved a real winner.

Hampton is renowned for being one of the few places to encourage conceptual gardens and since their inclusion 10 years ago the category continues to receive one of the highest application rates. This is all about story telling, often with a twist but always with an individual tale to tell. Simple stories often achieve the best impact and certainly the winner of the best conceptual garden by John Humphreys and Andy Hyde achieved this. Their garden Equilibrium was formed from a henge like construction of sea worn timbers and told the story of the colonization of their beach after stormy weather and the eventual and inevitable destruction. It held your eye as you walked around it.

Other highlights of the conceptual gardens included Gabrielle Evans’ Malawi garden telling the story of the move towards monoculture but the fight back by permaculture. Steve Smith’s personal reflection on mental illness and Sarah Wilson’s garden about synaesthesia provided much visitor engagement.

Unlike Chelsea, this show is the model for many other international shows with the combination of gardens and features plus the biggest floral marquee that you’ll see anywhere. It truly is a massive tent full of nurseries, many specialists, selling everything from the expected to the unusual. There are so many nurseries that a separate rose marquee is there too. So if you find yourself in London in early July head down to Surrey for the biggest day out and often the hottest days of the year.

Andrew is Chairman of Selection for the RHS Chelsea Flower Show, these are his personal views and not those of the Royal Horticultural Society.