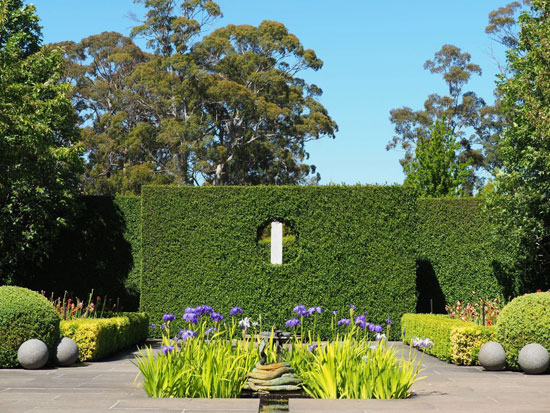 Food, garden and travel writer, photographer and (lucky us) garden tour leader, Robin Powell had the rare pleasure of visiting Stonefields in Victoria, a garden designed by Paul Bangay, which is featured in his new book, Paul Bangay’s Country Gardens. Here Robin talks about the characteristics of Bangay’s designs and her impressions of this impressive country garden.

In November I led a fun and garden-loving group around some great gardens in regional Victoria. (I’m taking the tour again next November, though the updated itinerary is not finalised yet. Contact Ros and Royce at Ross Garden Tours if you’re interested in joining me.) One of the highlights was  a morning spent at Paul Bangay’s garden Stonefields. This is the story I wrote about the garden for Spectrum.

Paul Bangay is one of Australia’s most high-profile garden designers. His country garden, Stonefields, an hour or so from Melbourne in the hills between Daylesford and Ballarat, is featured in his new book, Paul Bangay’s Country Gardens, among other large projects in Australia, New Zealand and the Hamptons in New York, now the site of some of his biggest commissions.

Stonefields is rarely open to the public. Every two years the gates open to benefit the Stephanie Alexander Kitchen Garden Foundation, an event that drew 8000 visitors across a spring weekend this year. Bangay also hosts occasional tours: no more than 24 people, tickets $240 each. I was lucky enough to visit another way, as leader of a tour group on a sunny morning when the irises and white rhododendrons were blooming, the wisteria was only just starting to fade, and the viburnums and dogwoods looked lovely.

An irreverent streak is also part of the Bangay style. The apparently classical statue in the rose garden, enrobed in a veil of dripping wisteria is a find that harks back to the adolescent Bangay’s lust for an antiquity to call his own, answered when a local church replaced its concrete statue of Jesus. Bangay acquired the statue, knocked off the head and the stigmata-showing hands, and presto… Photo – Robin Powell

The garden is as grand and tightly controlled as you’d expect from a designer whose reputation has been built on formal, geometric gardens of great precision. Two full-time gardeners keep the plants performing, the privet hedges clipped to a knife-edge and the fine-leafed lawns flawless. Indeed the finish of the garden is so perfect it verges on intimidating, which explains my reaction to the part of the garden I found myself continually drawn back to, the pool lawn that adjoins the terrace at the back of the house. 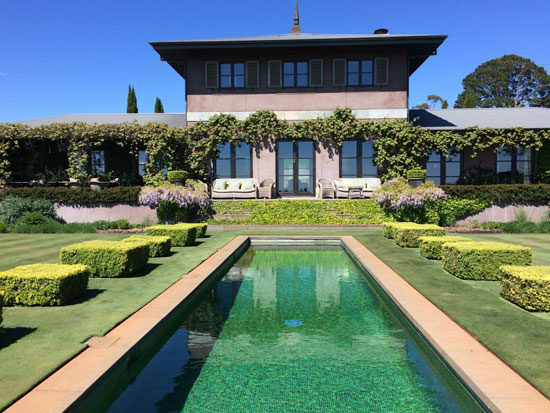 There are various neat perspectival tricks here and clever inversions of expectation. Instead of an infinity pool, for instance, the lawn itself has the infinity edge, its perfect green seeming to drop into the wild bush in the valley below as you take in the view from the terrace. Once you approach that apparently vertiginous edge however, wide stone steps appear that lead down to another garden area, with twin herbaceous perennial borders in shades of red and purple leading to an outdoor dining area on one side, and the woodland and lilac walk on the other. The plants here are chosen so that they never get high enough to be visible from the terrace, maintaining the illusion of green infinity. From this lower level, it is the pool itself that disappears, its location marked only by alternating benches of box, cut at different heights. 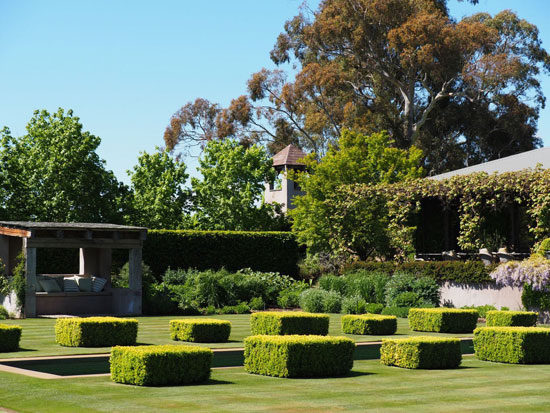 Hedges enclose both sides of the lawn, with dense herbaceous borders in cream and gold tones, and symmetrically placed, matching pool pavilions. I sat on the cushions in one of the pavilions, taking in the framed view of controlled garden giving way to wild bush, and the green-tiled pool with its restless light reflections. I loved the cleverness of the design and its subtle wit, those expansive views, and the gracious scale of everything. One part of me wanted to live this live of perfection and order, and another part rebelled and demanded a plastic banana lounge and a bunch of teenage boys bombing the pool.

I’m taking the Gardens of Victoria tour again in November, 2017. If you’re interested in joining me, or joining any other tour contact Ross Garden Tours on 1300 233 200.