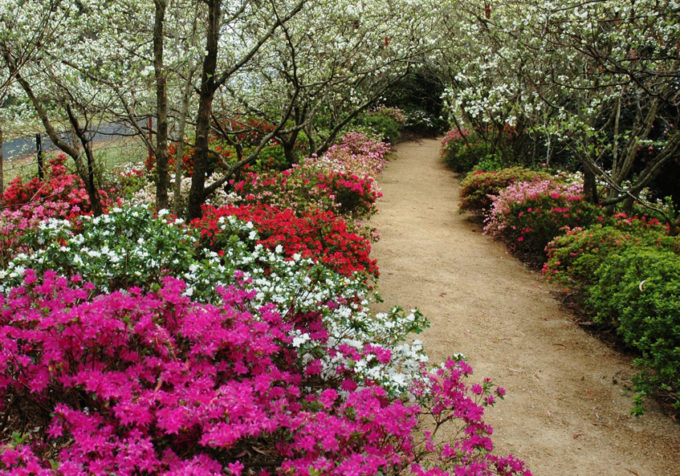 Plants are a long-term passion for Wayne and Sue Tapping. For decades they ran a wholesale nursery, landscape yard and retail garden centre.

That wasn’t quite enough plant life and plant creativity for the Tappings so at the same time they created a personal garden at their home, Wildwood, in Bilpin in the mountains west of Sydney. And when they sold the businesses, their seven-day working week habit shifted focus to the garden, which they started opening to visitors in 2012.

The five-hectare garden is part wild, with mature grey gum, messmate and blueberry ash, and part formal, cool-climate garden, with avenues of dogwood, cherries and maples. When, 18 years ago, their daughter asked to be married in the garden, the waterworks that had been slowly developing suddenly had an urgent deadline. Ponds set into the side of the hill were connected by cascades and waterfalls. Three hundred tons of sandstone were used to form the sides of the ponds and cascades, and another 100 ton of river rock lined them. With the help of a neighbour two 14-metre telegraph poles were muscled into place to form a bridge and the happy couple were able to be married on the bridge, right in front of the big waterfall. Now set in a serenely beautiful landscape, the water feature is an important part of the garden, and each year draws other happy couples, including a pair of gang gang parrots.

The avenue of nine weeping cherries, Prunus subhirtella ‘Pendula Rosea’, may have been the only plants Wayne was ever allowed to plant (Sue does most of the designing), but he likes to boast that they rate as the most photographed part of the garden. Now close to 30 years old, the cherries have single deep-pink flowers that are at their peak in the second and third weeks of September. Beneath them are hellebores, which start flowering in mid-August, and are still going strong when the cherries blossom above. The hellebores are all different colours and Sue adds the odd rare yellow or black to the mix in an attempt to get the bees to produce some interesting cross-pollinated hybrids.

When we commissioned a stonemason known locally as The Sheriff to make a sandstone lounge we envisaged small bits of stone cemented together. Instead he came back with a sofa comprised of a base, back, three cushions and two arms, all cut from a single five-ton piece of rock! It wasn’t what any of us expected but it’s fantastic, with the beautiful natural colours of the rock streaming through it. It sits in the garden surrounded by river rocks of different sizes. Before we open the garden in the spring we use a high-pressure hose to clean off any moss and dirt so that it looks like it just came back from the upholsterers!

Sue hated camellias after growing up with a neglected specimen grown in full sun, whose flowers browned and dropped and which was a picture of misery. Over her years in the nursery, however, with customers enthusiastically listing the many reasons they loved camellias Sue changed her tune. She now grows more than 600 varieties, many of them rare and unusual. She also has an interest in collecting the early Australian varieties. The camellia hybrid ‘Nicky Crisp’ is a particular favourite because of its strong upright form, large semi-double bright pink flowers and its ability to handle full sun. Its long flowering season starts in mid-July and carries on into mid-September. In November Sue cuts back any of the camellias that need pruning, and takes semi-hardwood cuttings. She doesn’t bother using any propagation aids to help increase the strike rate, relying on quantity to produce what she needs. Four or five cuttings are put into each tube of mix and she says the key to success is to make sure they don’t dry out as they weather warms.

Flick weed is our spring curse and it’s vital to get to it before it sets seed as the seeds fly off in all directions, really punishing you.

Feeding five hectares of garden is expensive, so we use long life or heat-treated chicken manures or Osmocote where necessary and deep mulch to feed the garden naturally.

As soon as we see the new growth ready to come away at the base of the perennials, such as penstemon, salvia, shasta daises, gaura etc. we cut down the old growth. We follow the cut with a feed.

We make our own mulch from garden clippings, and let it age in the paddock before piling it 100-150mm thick across the garden.

We have lots of azaleas in the garden and they can be badly affected by azalea lace bug. The eggs overwinter on the leaves and when they hatch in spring they suck the juices from the leaf, eventually giving it a silvery mottled appearance. We try to get on top of them before visitors arrive.

Over the years we have tried to use all the resources open to us. When neighbours have had stumps removed we’ve put our hands up and asked to have them. The stumps are aged in the paddock and then in the summer it’s Wayne’s job to manhandle the upturned stumps into position in the Dragon Stumpery, showing off their most dragon-esque features. The stumps are ornamented with dragon sculptures and the area adjoins a fairy, gargoyle and elf garden. This magical garden is set under a large white flowering cherry and is a big favourite with children and adults alike. There are fierce gargoyles to keep out evil spirits; sad, happy, scared and cranky devils; playful elves and fairies and many more. The characters are very expressive and often funny, and are placed high and low so that they are easily missed among the camellias, maples, azaleas, plectranthus and bromeliads and visitors have to keep their wits about them. It’s a place of fancy and fantasy for the many families who come to visit the garden.

This March, Ross Garden Tours takes you on a day trip to Wildwood in Bilpin. Join us for a garden lover’s day out to the Collectors’ Plant Fair in Hawkesbury! The Fair is a dynamic mix of stalls, specialist plant growers and garden retailers – a must visit for any plant enthusiast and the country vibe is so fun! Our day tour makes visiting a breeze, plus you’ll also enjoy a visit to the private garden of Fair co-founder in Bilpin. Book here.